Leading the council a ‘rewarding experience’ 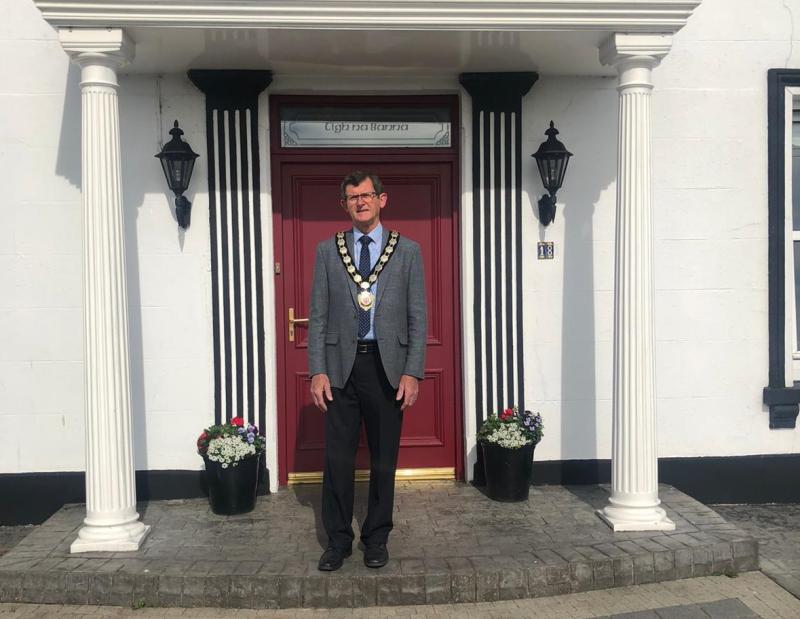 Martin pictured outside his house, Tigh-na-Banna.

The outgoing Chairperson of Mid Ulster District Council, says the experience of leading the council had been ‘rewarding’ and that the Covid-19 pandemic required a refocusing of efforts.

Cllr Martin Kearney handed the role over at last night’s Annual General Meeting and said the year in office was a ‘privilege’.

“It certainly was a very rewarding experience,” he told the County Derry Post.

“We had increased our vote by over a thousand first preferences [at the last election] and that allowed the SDLP in Mid Ulster to take the role of chair.

“The retirement of my colleague, Kate Lagan, a very hard-working councillor, allowed me to replace her on the council, although she still acts as my mentor.

“It has been a privilege to have been the number one citizen in a council area that consists of 150,000 people and has a budget of about £45 million.”

Mid Ulster has a high percentage of manufacturing and engineering businesses and the Portglenone native spent much of his time visiting the various businesses in the area.

That, along with the high level of small and medium-sized enterprises (SMEs) in the area, has acted as a double-edged sword in recent months.

“That’s where the bulk of my year was spent, out in businesses,” said Martin.

“This is the most entrepreneurial council area of all eleven. There are over 9,000 vat-registered businesses, which creates a good and bad story.

“The good story is that it is the most innovative council, but the bad is that it has fallen so far during the pandemic.

“85 per cent of the manufacturing and engineering industry was closed down at one stage. It’s like a Division 1 team, when you start to lose games, you quickly lose momentum.”

The challenge created by Covid-19 and its unprecedented impact on all facets of life had a big bearing on Martin’s final few months as Chairperson.

He feels the Council will need a strategy to help the area recover from its effects.

He said: “Councils now need to refocus. There is a loss of income from leisure services, even from planning. All the key methods of generating funds are now on hold.

“Now we have a bigger job to hold on to what we have put in place and deal with the daily requests from SMEs – they have fallen in between the cracks a bit.

“I have visited five food banks in the last week and seen firsthand the growth in the whole area of volunteerism, but many of those volunteers are people who have been furloughed.

“It’s quite a challenge. In a sense, it’s like starting all over again at its worst point.

“The council is doing its best to meet the immediate need of Covid-19. One of the things we did was allow Meadowbank to become a centre for Bloc Blinds to make PPE.

“They are manufacturing over 300,000 masks per day and are moving into their own complex, because PPE is going to be around for some time.

“The challenge is refocusing and rebooting again to try to come to terms with how we get the high streets open again.

“We want to get the council open again for those essential services, births, deaths and marriages, but things will be a long time going back to normal.”

As a former teacher, Martin placed education at the top of his priority-list at the beginning of his term, with rising enrolments and decreasing budgets creating huge pressure.

With the pandemic taking centre stage, the priorities have had to be somewhat adjusted.

“I managed to get into 32 schools to acknowledge what teachers are doing. When I started out here last year, schools were dealing with increased enrolments and declining budgets,” he said.

“Now, the main issue is getting schools back up and running again. To my mind, that’s the biggest challenge of all.

“I’ve also learnt much about the many pathways in education and there is a great move towards apprenticeships as an alternative to the traditional route.”

In a pre-Covid-19 world, one of the most significant aspects of Cllr Kearney’s time in office was the welcoming of so many visitors to the area.

He said: “Having them there to showcase the best of Mid Ulster was a very significant moment.

“Being able to show them first-hand the development of manufacturing and engineering was heartening. 40 per cent of the world’s quarry equipment is made in Mid Ulster.

“Mid Ulster is a welcoming place and especially for the many people who have come to the area and made it their home.”

As he finishes his year as Chairperson, Martin feels privileged to have been given the opportunity to serve across the vast area of Mid Ulster.

“To have had that respect from Swatragh to Fivemiletown and from the Sperrins to the Bann is something to hold onto and enjoy.

“You’re on a learning curve when you live on the periphery of the council area, because you have to stretch right across to the border and learn about the three legacy council areas.

“With four grown up, married children, and 10 grandchildren, it’s been a very special time in their lives too as they have watched their grandfather hold that position.

“My own grandfather, Teady McErlean, had been a councillor 100 years ago and a century later I never thought I’d be filling his shoes!”