Brian Tierney took up chain of office this evening 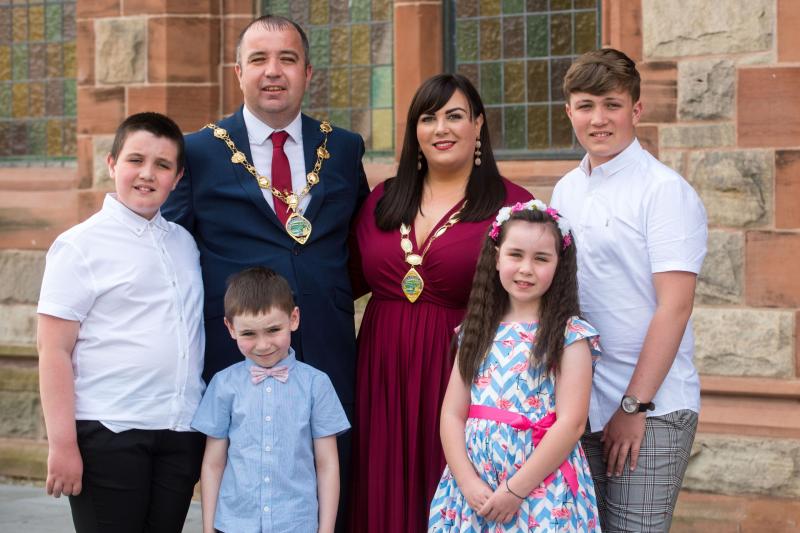 Derry City and Strabane District Council tonight elected a new Mayor to represent the City and District for the incoming 2020-21 year.

The new Mayor, who will be supported in his role by the DUP’s Alderman Graeme Warke who takes up the position of Deputy Mayor, said he was deeply honoured and privileged to represent the city and district.

He vowed to represent everyone, highlighting that campaigning for increased investment for the North West would be his key priority for the year ahead.

"I intend to be out and about the City and District as much as I can and no area will be left out or indeed favoured over another. I intend to represent people in every DEA on behalf of the Council to deliver the best possible future we can for our people.”

Acknowledging the difficulties faced and sacrifices made as a result of the current COVID-19 pandemic, Mayor Tierney said he hoped his year could be marked and remembered as the time when people can be brought back together and when communities across the city and district will reunite once again.

Outlining his commitment to campaign for investment, Mayor Tierney said: “Throughout my time as Mayor I intend to put a huge amount of my time into encouraging and fighting for as much investment in this City and District as we can. This is a critical moment.

“As Mayor, when it comes to investment in this city, I want to preside over a turning of the tide not another false dawn. I will work day and night to ensure that people in the North West are not let down again. There have been some signs of progress - but we have a long way to go.”

He outlined his commitment to advancing to the next stages of the City Deal and the expansion of Magee University.

He said that while it was understandable that the key focus for the British Government, the Executive and Council over the recent months has been on fighting Covid-19, it is vitally important that conversations on strategic projects are not put on hold.

“Pausing these projects because of a pandemic simply can’t mean they are permanently postponed. None of us can allow that to happen. I intend to bang every door that I can in Belfast, Dublin or London to make sure that we have a strong case put forward for investment in Derry and Strabane.

“If the opportunity arises I will travel wherever I have to, to ensure that people across the world know that Derry and Strabane is open for business and will welcome visitors to our beautiful Council area.”