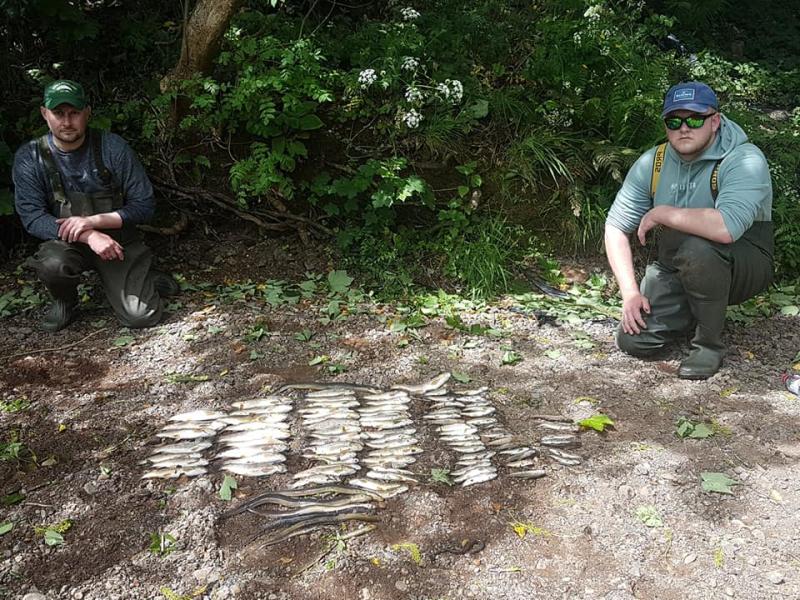 Paul Fulton and Matthew Doyle of Moyola Angling Association with some of the dead fish.

A stretch of river in County Derry has been ‘wiped out’ after 30,000 gallons of slurry entered the water last Thursday.

The spill at the Grange River, near Desertmartin, caused damage along a four and a half mile stretch and prompted an investigation by the Northern Ireland Environmental Agency (NIEA).

Agriculture Minister Edwin Poots told a Stormont committee on Friday that the collapse of an over-ground slurry tank was behind the kill, but NIEA later suggested this was not the cause.

A spokesperson said: “An NIEA Inspector is currently working with the site owner to try to prevent further run off from the premises.

“NIEA have collected statutory samples and the joint investigation with DAERA Inland Fisheries is ongoing, but at this stage it is not believed that the incident was the result of a structural failure of the tank.”

The Grange is a tributary of the Moyola river, a 27-mile stretch that is considered one of Northern Ireland’s best salmon rivers.

Seamus Donnelly, from Moyola Angling Club, who have the rights to fish in the river, says the kill has had a deflating effect on its membership.

“We’re absolutely devastated. The Grange River is our main small river. It’s a fantastic river with some great trout in it,” he said.

“Some of the brown trout that were found dead in it over the weekend are over a pound in weight, they’re big trout.

“We went out on Saturday and walked 400 yards and that’s what we lifted in that stretch. Four and a half miles of river has been wiped, it’s gone.

“The slurry kills everything – it kills the invertebrate life in the river as well. If it had been half a mile, you wouldn’t have worried so much, but that’s four and a half miles to repopulate.”

A spell of rain on Thursday night helped to cool the river and dilute the water, meaning that the effects of the spill on the main Moyola river have been lessened, but the effects have been felt further downstream.

“The blessing we had was that on Thursday night, there was a wee bit of rain. The main river went up two inches, but it was enough to cool the river down a bit,” said Seamus.

“So far there are no mortalities in the main river. Thankfully there’s no real damage, but our river goes into Lough Neagh at Ballymaguigan, down near the water works.

“There were quite a few dead roach in the more shallow parts down there. There were even dead eels, which was a bit of a shock, because they should be more hardy. It shows the strength of it when it’s killing eels as well.” 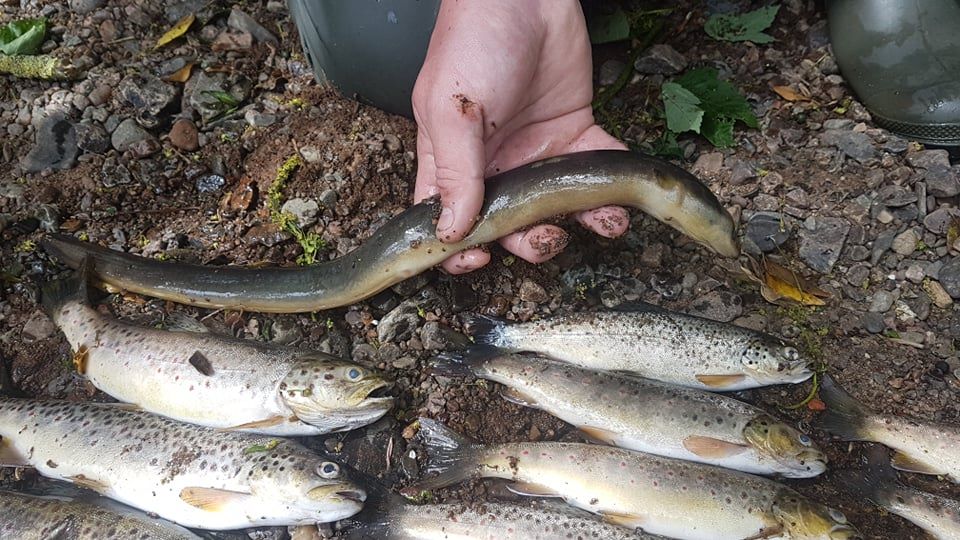 The news comes in a week where the angling club were celebrating a return to fishing following the easing of the Covid-19 restrictions.

“We were delighted to get back onto the river. We have 27 miles of it, so social distancing isn’t a problem,” said Seamus.

“Our chairman’s son caught a clinker of a trout along with his sister, and then the next day we’re reporting that the whole thing is wiped out. We’ve 500 members who are now devastated.”