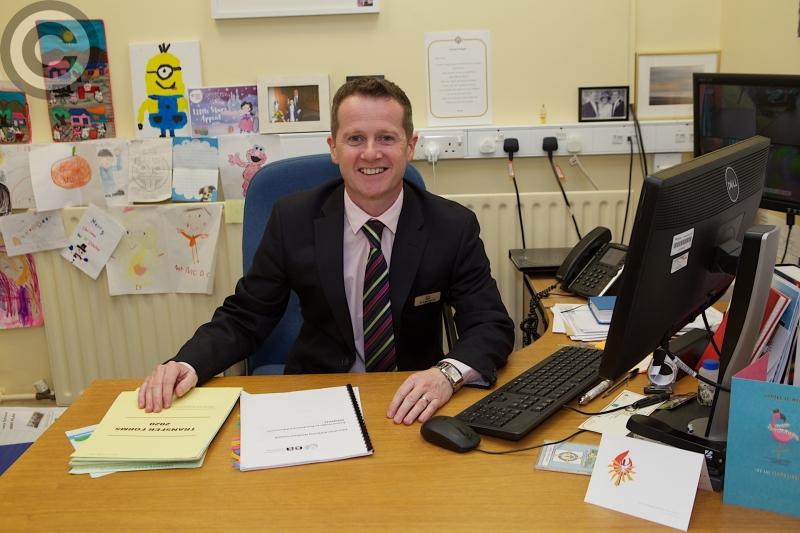 The principal of a Derry primary school said 'a lot of questions need to be answered' before Education Minister Peter Weir's plans to allow P7 children to return in August go ahead.

Terence McDowell, principal of St Eithne's Primary School, has also supported calls from church leaders for the '11 plus' transfer test to be scrapped this year because of the coronavirus pandemic.

The Education Minister last week said it was his aim to see a phased reopening of schools across the North, starting with limited provision for GCSE, A-Level and P7 pupils this summer.

Mr McDowell said he first learnt of the Education Minister's plans from the news and had not been consulted about them.

"It was the first we heard of it and a lot of questions would need to be answered first," said Mr McDowell.

"The Minister wasn't very definite about the plans."

Mr McDowell said he feels very sorry for his P7 pupils who face the possible prospect of moving on to post-primary school without the chance to say goodbye.

"My heart goes out to them," said Mr McDowell.
"For the other primaries we will eventually get them back and we can make up for the missed time, but for the P7s you can never replace that time.

"There are so many rites of passage like their school trip that they will never get to do and they will go into post primary without preparation that we would normally give them for what is a such a big change.

"If the plans go ahead, it will give us some form of contact and offer some closure to both pupils and staff.

"The P7 teachers were told they might not see these pupils again with just two days notice."

Staff at St Eithne's PS had already created a DVD for P7 pupils and a certificate to mark the end of their time at the school.

"It's always sad to see pupils go, but it will be all the more poignant this year," said Mr McDowell.

However, teachers would traditionally be on annual leave during the school summer break in July and August.

"We don't know what the requirements will be, but I believe it will be 15 pupils to a classroom.

"We have almost 30 in our two P7 classes so they will need to be split into two rooms and that will require more staff.

"The physical layout of desks and chairs will need to be considered and the resources they are using.

"We have already discussed requisitioning individual resource packs for each child but that will come at an extra expense to the school and I'm sure we won't get any extra resources."

Mr McDowell said the movement of pupils outside the classrooms would also be a concern.

"We need to consider how the children will move around the school as the corridors aren't very wide.

"We also need to think about meal times in the canteen, where normally we would have one or two slots to feed the whole school.

"Toilet breaks will need to be considered too and time given for children to properly wash their hands.

"This will all be time taken out of teaching time."

Keeping the children two metres apart staff and each other would be particularly difficult for younger pupils.

"Children in P1 naturally gravitate towards one another," said Mr McDowell.

"You can't police that, it is going to be impossible.

"Things happen at school where children fall and hurt themselves and they will need comforted.

"Do we have to tell a child with a bleeding to chin to wait while we ring their parents?

"Some children will find the transition to primary school difficult and they might be crying or upset.

"To not be able to comfort that child goes against the grain of the very reasons that teachers came into this profession."

Last week, Bishop of Derry, Donal McKeown sent a letter to Catholic post-primary schools asking for the transfer test to be scrapped this year, a call echoed by Mr McDowell.

"The transfer test causes much anxiety anyway and our teachers have been unable to prepare children in the normal way this year and working from home just doesn't compare.

"It is causing much anxiety and we need to consider something to stop that.

"There isn't a level playing field in what parents can provide.

"Every household is unique.

"I am very mindful that parents have been thrust into the role of teachers, they are not professional teachers.

"Parents shouldn't compare themselves to others.

"We always tell the children just do your best and that's the same message I would have for parents.

"They are doing the best they can."

The deputy chair of the assembly education committee,  said the forum, would "address huge concern and anxiety at the prospect of an eventual return to school".

"It's my view that any return to school must be done in complete partnership and in conversation with all those involved in education when the time comes," said Ms Mullan.

"Parents, young people and our teaching staff must have confidence that health and safety is paramount in any return to school.

"There will be no one size fits all approach for schools in preparing to re-open.

"There should be an intense period of discussion that will be crucial to understand the flexibilities and the bespoke needs that different schools and different settings will require."