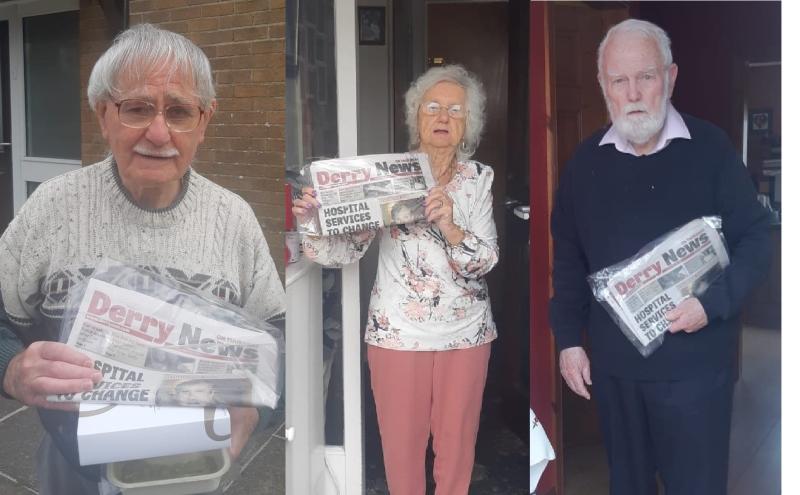 Some of those who received a copy of the Derry News - from left - John Gallagher, Nan Murphy and Dermot Kelly.

The Derry News has helped to reconnect users of a community centre in Derry who have not seen each other for more than two months.

As with all local centres, the Older People North West – Age Concern base at Malvern Terrace in the Waterside had to close its doors in March due to the coronavirus pandemic.

The centre was a daily hive of activity with a wide range of social events organised for its users.

Many people also visited the centre each day for a meal and a catch-up with friends.

However, all that came to a stop as a result of the coronavirus lockdown.

Despite their base being closed to visitors, Age Concern has maintained its 'Meals on Wheels' service which delivers around 70 meals each day to elderly people in Derry.

Many of the people who would have visited the Age Concern centre have been cocooning in their home in the last two months.

For a lot of them, their 'Meals on Wheels' delivery is the only time they see another person each day.

Last week, the Derry News gave Age Concern copies of the newspaper to be distributed with their daily meals.

Christine Carlin, Research and Development Officer at Older People North West, said people were delighted to receive the newspaper as most of them are unable to get their local shop at the moment.

Out of the newspaper delivery, came the idea for some of the centre users to have their photographs taken and featured in the Derry News, giving friends a chance to see each other after so long apart.

Christine said: “When Ciaran O'Neill approached us to offer us free Derry News papers we accepted gratefully and the universal feedback was fantastic.

“We thought it would be a good idea to take photos of people receiving their papers with their meals.

“On coming back to the centre where our meals are cooked on Chapel Road, there was great excitement for the kitchen team to see people that hadn’t been able to come in for lunch for over two months.

“When we came in from the daily meals on wheels run, and showed the photos  to our catering team we realised there was a hunger for people in lockdown  to see one another.

“This give rise to the idea of 'read all about it': creating a photographic reunion in the pages of the Derry News.”
Christine said that once they had contacted their regular centre users, there was a buzz about taking part.

“One lady said 'there is no way you are taking a photo of me on Thursday, come back tomorrow when I’ve got my make up on'.

“Another woman said ‘give me a day to get my glad rags and make up on before you take my photo’.

“True to her word she appeared glammed up the following day ready to be photographed.

“One of the things that Covid 19 lockdown has meant is that one day is pretty much like another.

“By accident, we have created excitement, a talking point and a way of seeing one another when we can’t physically come into Malvern House on Chapel Road.

“These small things matter  in giving a point of focus, a topic to talk about and the anticipation of seeing old friends' faces.

Meanwhile, Age Concern are appealing for small travel size bottles in which they can put hand sanitiser.

The hand sanitiser has been donated to the charity as part of the Walled City Brewery’s Community Spirit  Project which has been turning left-over alcohol into sanitiser.

However, Age Concern need more small bottles in which to distribute the sanitiser to its users. Anyone who can help is asked to contact 028 7134 7478.