The Big Drive-Inn are working on adding Mid Ulster venues to their tour. 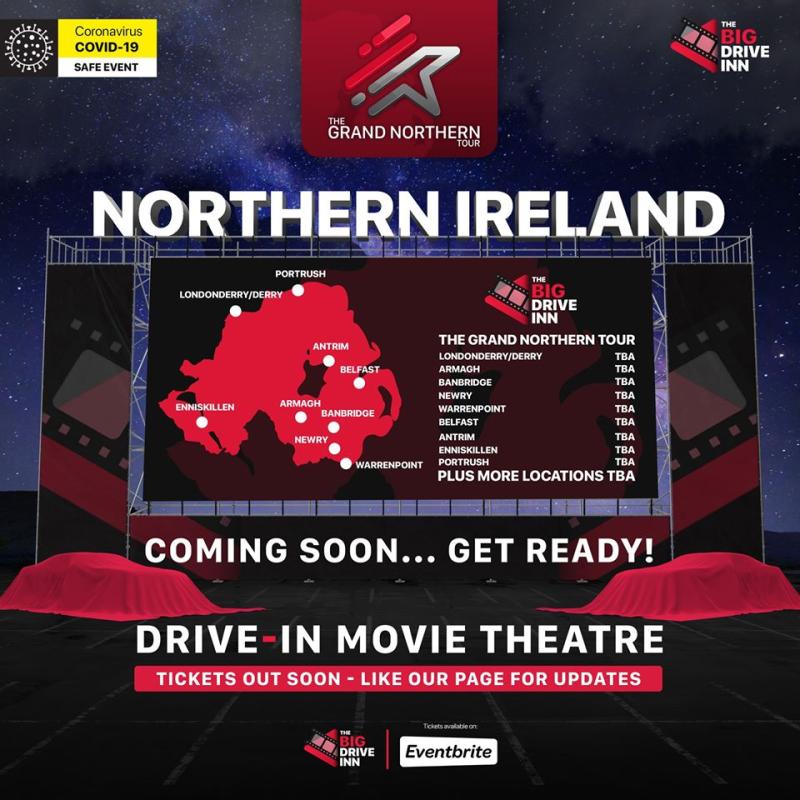 A drive-in cinema company has said it is developing plans to add Mid Ulster venues to its planned tour of Northern Ireland later this year.

South Derry film fans’ closest venues under the initial plan would have been Derry city, Portrush and Antrim, but plans are currently underway to bring the tour to Cookstown and Dungannon.

Conor Moran, from The Big Drive Inn, told the County Derry Post that they hope to show four different screenings per day.

He said: “We use an LED screen and the brightness is a lot sharper than a projector. Our movies can run from 12 o’clock in the day til 9 o’clock at night.

“In the afternoon, at 12pm and 3pm, we will be showing more family-orientated films. At 6pm, we’ll show a classic film and at 9pm a blockbuster.

“The plan is to do this as a tour of Northern Ireland and keep it going as long as Covid-19 lasts.”

The company had already begun to tour in the Republic of Ireland before it was placed into lockdown, with shows in Dundalk and Cavan, and are now resuming plans to move north.

In keeping with strict hygiene guidelines, the organisers say they will be taking all necessary precautions and implementing social distancing.

“We encourage arriving in, staying in and leaving in your car so it’s complete family isolation,” said Conor.

“Toilets will be provided, we provide portaloos. Your temperature is taken on entering the toilet by an automated temperature taker.

“If your temperature is too high you wouldn’t be able to enter the toilet. All toilets are sanitised and there is state-of-the-art technology checking temperatures.

“All toilets are sanitised after each use. There will be sanitisers on site as well and we’ll be encouraging people to sanitise.

“We have a host of other processes in place to protect against Covid-19. All transactions are cashless, so you buy your ticket online.

“We won’t be offering any food yet, until the lockdown eases. If that’s during the tour, we’ll look at doing some food, but for the first few events, we’ll be encouraging people to bring their own.

“All our staff members have undergone safety training to ensure we promote and enforce a safe event for all.”

If the tour proves to be a success, the organisers have said they may look at continuing the service after the Covid-19 restrictions have been eased.

“We hope to continue with it after the lockdown. It will be almost a funfair operation, staying in each venue for two days.

“All of our screens are on trailers and we have four smaller trailers that are shown throughout the car park.”

Conor does not foresee any issues in having to enforce social distancing but have insisted that they have a security team in place to deal with those who aren’t complying.

“We did it just before the lockdown in the south and to be honest, people don’t want to leave their cars,” he said.

“We had hundreds of cars and had no hassle. People are excited to see the film. If they do, we’ll ask them to leave the car park and we have staff in place for that.”

More details can be found on the Big Drive-Inn Facebook page.