It's official. Derry has run out of bikes as demand soars during the coronavirus lockdown 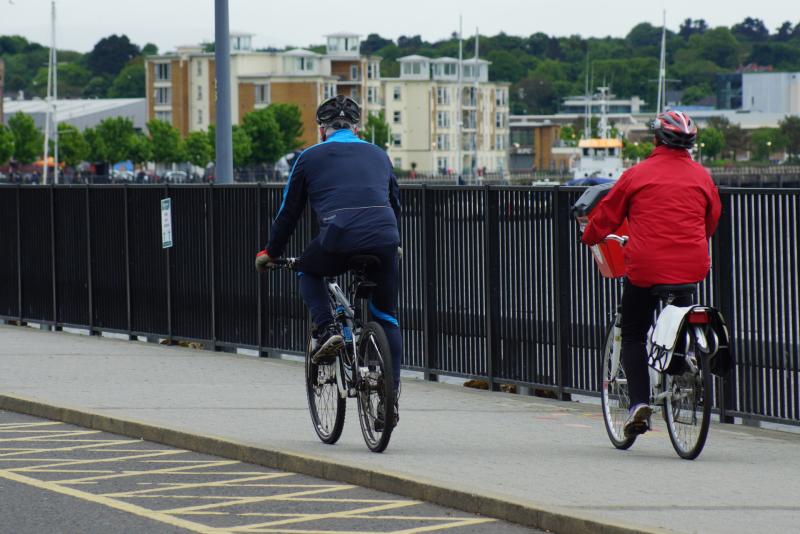 Derry has become such a city of bike lovers during lockdown that one of the north west's biggest cycling shops has run out of stock.

"It's a cycling pandemic," joked Brian Cassidy of Claudy Cycles, who hasn't seen demand like this during his 35 years in business.

"First it was toilet roll and now it's bicycles.

"I have had people queuing right out to the gate and people have actually texted me thinking there was a wake going on because they saw all the cars parked on the road."

Groups of cyclists have become a familiar sight across the city as people take advantage of their daily exercise allowance to get out and about on two wheels.

"The country is going mad for bikes," said Mr Cassidy, who is working from 5am until 10pm at night delivering and repairing them.

"Everybody is on furlough and once they got their new fences built and painted they all wanted a bike."

With manufacturing halted in China due to the global pandemic, bike supplies have dried up and Mr Cassidy estimates it could be up to two weeks before he has them in stock again.

"There's not a bike to be got at the minute," he said.

"I was selling bikes to people as far away as Sligo and people were buying them after only seeing a picture on WhatsApp."

Mr Cassidy has also seen a huge upsurge in repairs as people across Derry pull their neglected bikes out of attics and garden sheds.

"People are digging up these old relics to be fixed," he laughed.

"I've been surprised with some of the things people are bringing to me and of course they all want them done today."

Will Ennett from the Northland Road has been getting out and about on his new bike during lockdown, which has a specially built trailer for his two kids Rose, 4, and Johnny, 2.

"The children love the novelty of it and we have been discovering lots of new places  like Ebrington Square and the old railway line at the Foyle Road," he said.

"It's a new hobby and something I plan to keep up once lockdown is over."

Halfords has also seen a surge in bike orders at its Crescent Link store which is currently closed to the public, but is offering a click and collect service.

"If you were looking for a bike today you would struggle to find one that is in stock," said store manager, Colm Shiels.

"We get three deliveries a week and they come in the back door and we build them and then they are going out the front door to customers.

"We have been flat out, it's been like Christmas."

So what is the appeal of cycling during lockdown?

"People love the freedom to get out and about," Mr Shiels explained.

"The gyms and swimming pools are closed so people who are used to daily exercise are having to think of different ways to do it.

"For some people cycling is a way to justify some bad habits they might have taken up during lockdown."

Business has also gone through the roof for Bee Cycles repair service.

A spokesperson for Bees Cycles said they were struggling to cope with demand.

"It has been hard to keep up with demand but it's great to see."

News of the massive increase in the sale of bikes in Derry comes just days after plans were announced to create a new 'Cycling Champion' role in the city.

Infrastructure Minister Nichola Mallon said earlier this month that she wants to appoint a new walking and cycling champion with a focus on transforming communities and developing creative solutions to support our new way of living during and post COVID-19.

“Our champion will ensure that we deliver our commitment to increase the percentage of journeys made by walking and cycling.  Inspiring our communities, restructuring our spaces, changing forever the way we live – and changing it for the better.

“I want to increase the space available for people who want to walk and cycle by extending pavements, pedestrianising streets and introducing pop up cycle lanes.

"I have already identified some parts of Belfast City Centre and Derry city that can be transformed in this way and I intend to work with councils to identify more areas across the North as a matter of urgency.

"Changing how we use our spaces will transform communities right across Northern Ireland – creatively change lives – enable social distancing and encourage health and mental wellbeing.

“This environmental and public health work will be done on a collaborative basis, with an action group, formed from both within and outside government.

"I also want to work in collaboration with communities, including identifying and creating ‘Quiet Streets’ where pedestrians, cyclists and play have priority and motor vehicles are guests.”