Eoin and Tommy Hughes aim to beat their own record 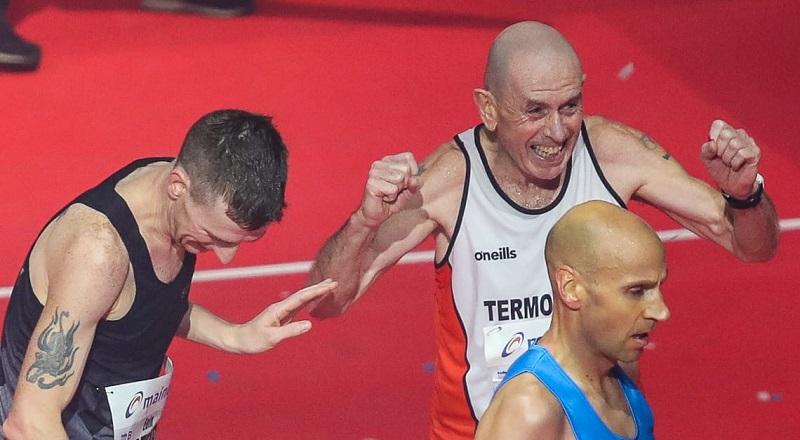 The ink had barely dried on their World Record when Tommy Hughes and his son Eoin set their sights on beating it later this year.

The duo ran the Frankfurt marathon last October in a combined time of 4 hours 59 minutes and 22 seconds, beating the previous record for a 'parent and child' of 5:02:12.

From getting across the line to having everything rubber-stamped is a tedious process, but last Saturday they received their certificate.

For a considerable £650 payment, Guinness World Records turn around their checking process in a week, but to get it done free takes time.

“They have a lot of rules and regulations to check before they make your record official and there is a 12-week response,” Eoin told the County Derry Post.

It was followed by a further check, adding another 12 weeks to the process which was also lengthened by the language barrier for witness statements from the Frankfurt marathon (organisers).”

Eoin lives in Maghera and runs for Acorns AC. He turned 35 in January, the same month that saw Tommy enter his 60s, but they are not resting on their laurels. Before Covid-19 forced the London marathon's postponement, they had planned to enter to break their record.

“Guinness World Records are there on the day so it can be made official on the day,” Eoin added.

They are have their sights get on running it (London), if it takes place in October. A return to Frankfurt or Dublin in October is in the pipeline, as well as December's Málaga marathon.

“We hope that one of them with go ahead and we will beat that record again...easily,” stated Eoin, who feels he has more to offer.

While Tommy has ran 'over a hundred' marathons, barring a run around Belfast course a few years ago, Frankfurt was Eoin's first 'real go' at the 26 mile distance.

It was a 'bad day', after a few niggling injuries curtailed his training before the event.

The duo trained on their own during the week ahead of Frankfurt, before meeting up for the 'longer' weekend run up around 20 miles.

But now, as they wait on their next goal Tommy – who lives in Gulladuff and runs for Termoneeny RC - is clocking up 100 miles every week, Eoin's work schedule limits him to '60 to 70' miles, but he is not concerned.

“There are no races to train for and I don't see the point of putting in big miles, but once we get a (confirmed) marathon to train for, I'll ramp it back up again.”

Now in the 60-65 category, there are more records for Tommy to challenge for. He broke the indoor 3,000m record earlier this year and there was a point last year when he was breaking one every week.

For now, it's about training away, adding miles to the legs and waiting for the green light to challenge for another World Record.

Grab next week's County Derry Post for a in-depth feature on the duo.