Derry man placed on furlough during the coronavirus pandemic wins £300,000 on a scratchcard

"My heart felt like it was going to burst out of my chest. In fact, I still can’t believe it" - Robert Fullerton 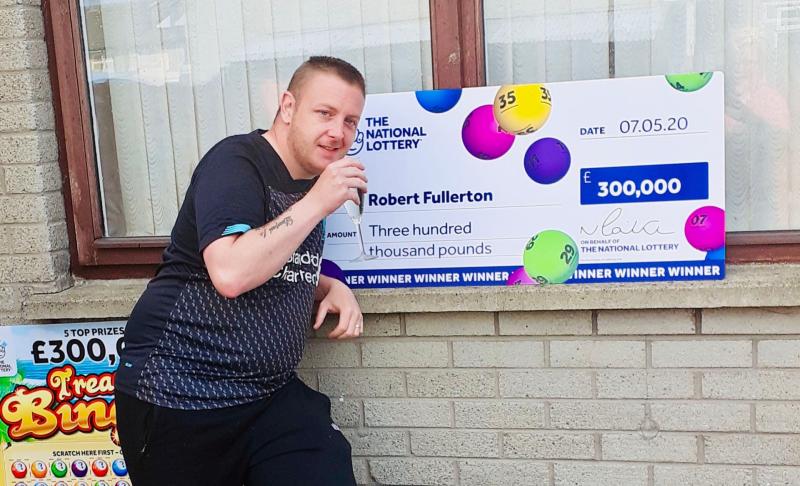 A furloughed kitchen paint sprayer from Castledawson in County Derry is celebrating a dramatic change of fortune after winning a massive £300,000 on a National Lottery Scratchcard.

Robert Fullerton, who is 30, bought the £3 ‘Treasure Bingo’ Scratchcard at his local Vivoxtra store whilst shopping for some essential grocery items on May 4.

Little did Robert know that later the same evening he would discover he’d won an amount 100,000 times greater than the price of the scratchcard!

The incredible news comes as an amazing boost for Robert and his wife Susan (25) as both had been recently furloughed from the company they work for as a result of the COVID-19 pandemic.

Robert works as a spray painter and Susan as a machine operator for a leading local kitchen supplier and, like many across the country, have been furloughed for the past five weeks as part of the Government’s job retention scheme.

Robert explained how his life-changing win came about.

“I was out doing an essential grocery shop and had a scratchcard in my pocket with a £3 win on it. So while I was paying for the groceries, I exchanged it for another similar National Lottery Scratchcard, and bought an extra one for good measure.

“I brought the two scratchcards home and played them that night.  I didn’t win anything on the first scratchcard and gave it to Susan to check, while I was scratching the second card,” he continued.

“Half-way through, it was already showing that I’d won £300,000 and I started physically shaking.  I was thinking to myself, ‘that’s not right’ and had to get up and go outside for some fresh air.

“I showed the scratchcard to Susan and took a photo that I sent to my mum and sister – both of whom agreed that I wasn’t seeing things and that, as far as they could see, I’d won three hundred grand!

“After a restless night, with little or no sleep, I called The National Lottery the following morning. They asked for some details and then, I’ll never forget, the lady on the phone said… ‘Congratulations, you have won £300,000’!

“My reply was ‘you what?’ My heart felt like it was going to burst out of my chest. In fact, I still can’t believe it.  It’s like a dream come true, especially in these uncertain times when we’re stuck at home and don’t really know how our jobs will be affected by this coronavirus pandemic.”

Despite his  big win, Robert hopes to get back to work as soon as possible, saying that he loves his job and the ‘banter’ with his workmates.