Participants asked to write 200 words about a photograph 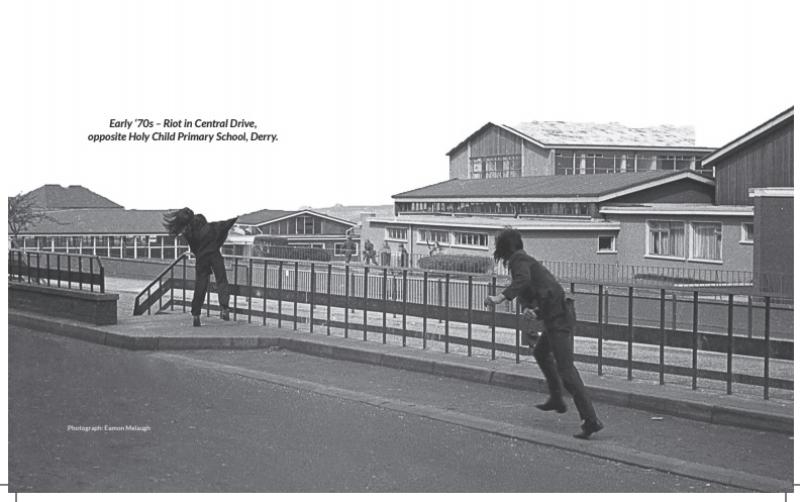 A photograph of two young rioters in Creggan in the early 1970s. Photo by Eamon Melaugh

A unique book has been created about the impact of the 'Troubles' on people in Derry.

The book, which is called ‘200 Words One Picture’, takes an intimate look at how the Troubles affected the lives of ‘ordinary people’.

The title is self-explanatory.

People share their thoughts and feelings about one particular event that shaped their lives or stayed with them over the years.

The book was due for official release at the end of March this year but due to the coronavirus pandemic the event was postponed.

However, starting tomorrow, the Derry News will be publishing some of the stories and photographs from the book.

Eamonn Baker, editor of '200 Words One Picture', said that sixty people had contributed to the book.

“Each of them has their own uniquely personal story to tell,” he said.

“Words and pictures are set side by side offering an insight into the visceral impact of forty years of conflict on the lives of ordinary people dealing with extraordinary circumstances.

“'The abnormal became normal' as more than one contributor put it.

“Contributors to the ‘Valued Voices’ and ‘Towards Understanding and Healing’ publication came from a wide variety of backgrounds – family members, neighbours, friends, victim survivors of IRA/British Army/Loyalist violence, former paramilitaries, ex-prisoners, ex-soldiers, former members of the RUC, poets, lovers, Travellers and young people facing into their future with both hope and determination.”

Mr Baker said that 'universal suffering' was evident throughout the book.

“I would applaud the openness and resilience shown by all who found it within themselves to share their ‘truth’,” he added.

The first of the stories from '200 Words One Picture' are published in tomorrow's Derry News.