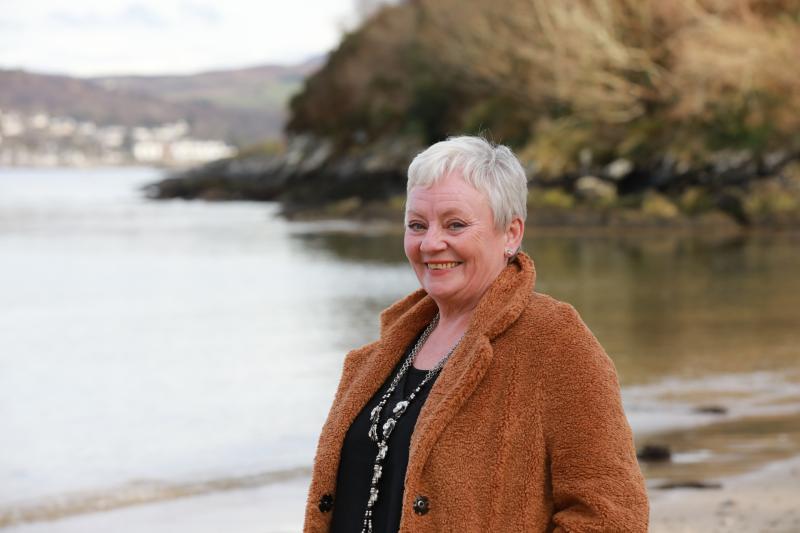 A woman who sadly lost three family members to amyloidosis is angry lifesaving treatment is currently being withheld from those in Inishowen and wider Donegal with a similar diagnosis.

All three were from Burt in Inishowen.

Amyloidosis is also known as ‘Donegal Amy’, due to its prevalence along a 15 mile stretch of coastline between Carrigart and Burtonport.

It is caused by the build-up of an abnormal protein in the body’s tissues and organs, which affects their shape and function and can lead to organ failure.

Ms Callaghan said Irish people were effectively being left to die of an Irish disease.

“Lifesaving treatment for amyloidosis became available in Britain in July 2019 and has been available in the North since October 2019.

“It is an absolute scandal this same lifesaving treatment is being denied to people with an amyloidosis diagnosis in the Republic.

“There are currently approximately 20 people in the Donegal/Sligo area with an amyloidosis diagnosis and a further 10 to 15 in other counties, urgently waiting to start treatment if only it could be made available to them.

“It is a disgrace. Ireland is the only country in Europe where the funding is not available for people with an Amyloidosis diagnosis to receive treatment. It is an Irish disease and Irish people are being left to die,” said Ms Callaghan.

She is herself one of the 16 people in the North with a confirmed amyloidosis diagnosis.

Highlighting the treatment disparity between the two jurisdictions on the island of Ireland, she said an amyloidosis patient she knew in the North was currently receiving “lifesaving infusions” at home.

Ms Callaghan elaborated: “An on-the-ball cardiologist realised in October past this man had Amyloidosis. Due to Covid-19, he was unable to travel to the Royal Free Hospital in London for treatment, so he is now getting lifesaving infusions at home. He sent me through a picture this morning of him walking his first 100 yards.

Ms Callaghan, who was currently cocooning at her home in Derry due to Covid-19, described amyloidosis as a rare disease.

“The nature of the disease is that because it hits the whole body. People are going to cardiologists, neurologists, gastroenterologists. There is a whole cluster of symptoms, so patients are being referred to different medical professionals, with nobody realising it is Amyloidosis they are dealing with.

“I want raise the awareness about it. My father, Hugh, my aunt, Polly and my cousin, Stephen, all from Burt, all died from amyloidosis.

“The thing about our type of amyloidosis is we all come from that 15 mile stretch of Donegal coastline. I’m presently speaking with a man in Australia who was recently diagnosed, and his people come from that area too. My great grandmother, and this is the line we believe it came through, is from just outside Carrigart,” said Rosaline Callaghan.

Ms Callaghan discovered she had the “faulty” amyloidosis gene in 2007.

She had travelled to the Royal Free Hospital, the UK Centre of Excellence for genetic testing.

Although, she stressed, not everybody with the faulty gene goes on to develop amyloidosis.

Ms Callaghan recalled: “I knew I had amyloidosis. It was one of those mad things, but my father’s voice woke me from my sleep.

“He and I had had a conversation about my Aunt Polly in 1982 and he had said to me, ‘Rosaline, they are saying this is hereditary. I think this is going to have implications for us.’ So, my father was on the ball as well.

“Amyloidosis is progressive and ultimately fatal in the absence of treatment. It is a long drawn out process. My father was almost 22 months in the Foyle Hospice getting sicker and sicker.

“Basically, I’m about 20 months in. The disease manifests in your late 50s and early 60s. Because I knew what I was looking for, I was not one of those people who was running to experts. Once it hit my nervous system, I knew what I was up against,” said Ms Callaghan.

Ms Callaghan’s consultant told her she had received her diagnosis two years earlier than most.

Due to her “hard family experience”, Ms Callaghan knew what she was looking for.

She added: “If I lived in England, I would now be getting my treatment, in spite of the Covid-19 situation. As I live in the North, I have to apply for funding from my local Health Care Trust to enable me to receive the treatment.

“I am challenging this because the process causes months of delay and in a progressive illness, as each month goes past, I am getting sicker.

“However, my focus is on the 10 to 15 of us in the North, the other people coming behind me, who will actually probably be very sick by the time they are diagnosed. Why should they have to apply for funding for their treatment?

“But the real kicker is that the treatment is not even available in the Republic of Ireland. The thing that is keeping me up at night is that Irish patients in Donegal with Amyloidosis are dying. One I definitely know of died on Christmas Day, which I think is a disgrace,” said Rosaline Callaghan who is determined to set up an all-Ireland Amyloidosis Patients’ Support Group.

Rosaline Callaghan felt she was fit to campaign on behalf of other people with an amyloidosis diagnosis because she received her diagnosis two years earlier than most.

She recalled: “My father was getting poked and prodded by so many people when he was up in Belfast. He knew amyloidosis was going to kill him and he was in terrible pain. But the doctors asked if they could take biopsies from him, to help with their research.

“It cased him incredible pain and he could not have been the only one who did this for medical research. My father said, ‘There is nothing you can do to help me, but this will help the others coming after me.’

“He was probably thinking of his family because we all have a chance of getting it. So, he went through all that. Other people went through all that. The scientists did all the research. And now there is a treatment, which Irish Citizens are not getting for an Irish disease. I can’t understand for the life of me why Ireland does not have the treatment available.

“It is another health scandal. Amyloidosis is a long drawn out process.  Any of the medical experts you would be speaking to would be saying this is an absolutely horrendous death. My father was a big strong man who went to not being able to walk, to crawling on his hands and knees, to dying in Foyle Hospice for 22 months,” said Ms Callaghan.

The treatment for amyloidosis is a gene silencing treatment.

According to Ms Callaghan, the treatment has “astounded” medical people.

Ms Callaghan said: “Treatment in 56 percent of cases not only halts progression, it reverses it.

“It is a proven treatment, which is being denied to Irish people. I want to shout that from the rooftops.

“How can people sleep at night knowing there are 30 to 35 people in Ireland we know of who are in the stages of dying.