Mystery of the ‘McManmoy’ bottle solved

The owner of the bottle had a keen eye for marketing. 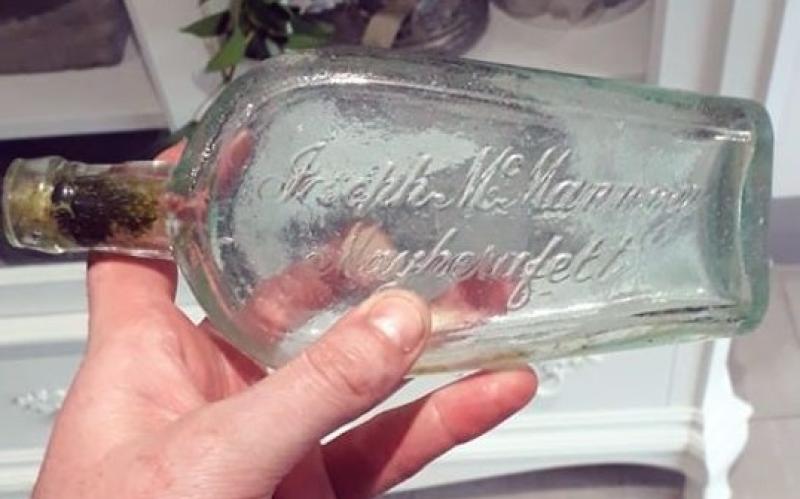 A County Derry guest house owner and tour operator has helped solve the mystery of the bottle washed up on the shores of Lough Neagh a few weeks ago.

The bottle, bearing the name of ‘Joseph McManmoy’, was discovered by Dean McErlean where the Moyola River enters Lough Neagh and the unusual name had everyone stumped.

After reading the County Derry Post report on the event, Magherafelt man Eugene Kielt got in touch to shed some light on the situation.

He said: “The names McManmoy, McManmey and McManemie were older variants of a family name common in the west of Ulster and now standardised as ‘McMenamin’.

“In the official Register of Marriages for Magherafelt in 1871 there is a Joseph McManemie of Magherafelt who married Eliza McGurk of Brackagh, S.Gallon at ‘Coolcam’, Desertmartin on 26 Sept 1871.

“The name ‘McManemie’ sounded similar to the name displayed on the bottle. When I then examined the name in the original church register, the groom’s name is given as ‘McManmey.”

“Whilst it is difficult to see clearly whether the name on the bottle ends in ‘oy’ or ‘ey’ I would be confident that the Joseph McManmey who got married in Desertmartin in 1871 was the same person whose name is on the bottle.

“Not only is the name similar, the time period fits too, for the bottle looks like it could have been produced a hundred or more years ago.”

The fact that McManmey’s name is embossed on a glass bottle hints at a man who was well ahead of his time when it came to business development.

“During my research I discovered that Joseph McManmey was a publican,” explained Eugene, who, along with his wife Gerardine, runs Laurel Villa Guest House & Tours in Magherafelt.

“In those days local publicans would have had the name of their business stamped, embossed or added in some way to the bottles and jars of liquor they sold.

“McManmey seems to have had an eye for marketing, dispatching his liquor in attractively branded bottles like the one which has just been found.

“His bottles were obviously very durable too, going by this example that that has survived in perfect condition despite the ravages of time and nature.

Joseph McManamey operated licensed premises and an undertakers on Rainey Street from around 1870 until he died in 1909.

The business continued to operate until the 1930s under the stewardship of his son Thomas John.

An obituary in a local newspaper at the time described Joseph as ‘a man of the highest integrity and his genial temper, urbanity and affability made him a general favourite with all’

He is buried in Milltown graveyard in Magherafelt.