Priest tells killers of Lyra McKee: Admit the truth and face justice for what you have done

New appeal made on the first anniversary of the journalist's murder 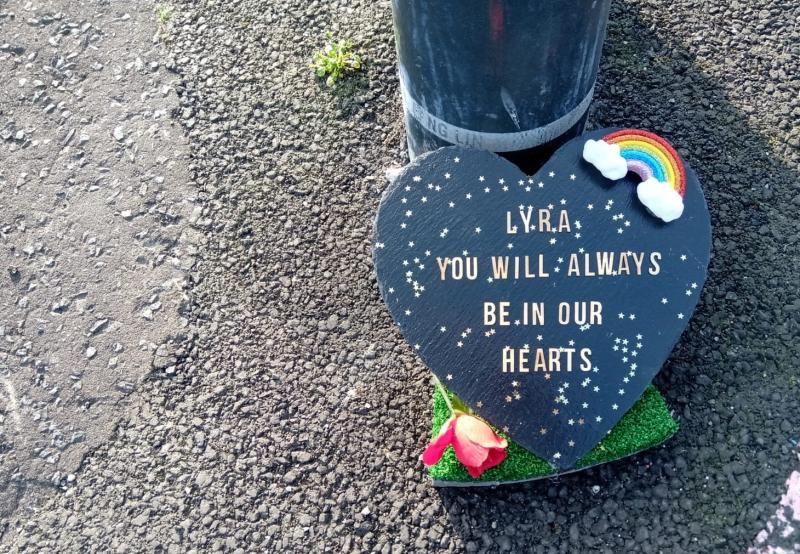 A tribute to Lyra McKee which was left this weekend on the Creggan street where she died last year.

The killers of Lyra McKee have again been urged to come forward and face justice for what they did.

Yesterday marked the first anniversary of the murder of the 29-year-old journalist in Creggan last year.

The New IRA admitted that one of its members killed the young Belfast woman who had been observing a riot when she was shot.

One man has been charged with murder in connection with Lyra's death.

Speaking at a memorial Mass in St Mary's Church in Creggan last night, Father Joe Gormley urged all those involved in the attack to come forward and face justice.

“As a Christian community, on the feast of the divine mercy, we must pray that those who killed Lyra will be touched by the mercy of God to admit the truth of what they have done,” he said.

“By doing so they will reclaim for themselves their own eternal worth and value given to them by baptism.”

Father Gormley, who gave Lyra the last rites on the night she died, said her death had devastated her family, partner Sara and Lyra's friends and colleagues.

“Lyra's death brought the pain of all those who have suffered as a result of the conflict here to the fore once again,” said the Creggan priest.

“Lyra's death opened a vision of the past that was horrific, where people literally die on our streets.

“That nightmarish vision challenges us all to shape the future.”

Father Gormley said he was 'not blessed' to have known Lyra personally.

“However, over the past year I have learned from her close family and friends that if Lyra had survived she would have wanted to meet the people who were behind her death.

“This would not absolve them from their legal and moral responsibilities, rather it would help them to see that when they had met these responsibilities their lives could be a source of mercy and healing.”

Father Gormley added: “Lyra's sister, Nicola, at the end of the walk for Lyra last year said she was willing to stand with them and accompany them as they made that journey towards taking responsibility.

“This is because that is what Lyra would have done.

“If they were to embark on that journey it would be a powerful example that others who have done similar things could follow. Then Lyra's death and Christ's death on the cross would not have been in vain.”

Derry SDLP councillor John Boyle, who was the city's Mayor last year at the time of Lyra's death and was a personal friend of the young journalist, also appealed for people with information about her death to give it to the police.

“Often in life, we all remember where we were when we heard or saw something of significance. I recall, in acute and painful detail, where I was when I heard of the murder of Lyra,” said Cllr Boyle.

“The moments when I heard of the callous murder of a friend. The murder of a woman that I had mentored and encouraged as a teenager to follow her dream of becoming a journalist. Thinking of the harrowing future, immediate and long term, for her mother and her family.

“Lyra's mother Joan tragically died less than a year after her daughter. I am certain that she died of a broken heart and as surely as the men who murdered Lyra on the 18th April 2019 on Fanad Drive were responsible for her death they also murdered Lyra's loving mother.”

Cllr Boyle said those who had killed Lyra McKee had 'besmirched the good name and reputation of the people of Creggan'.

“Lyra's murderers are only interested in shredding the hopes and aspirations of the people of Derry. They have nothing to offer beyond a narrow hate filled jingoism.

“Lyra's murder was brutal and callous.

“Many words have been spoken and written about Lyra McKee over the past twelve months.

“Wee Lyra, as I knew her, was a ferocious and compassionate seeker of the truth.

“She was a daughter, a sister, an aunt, a partner and friend. She was a friend to people less fortunate than herself.

“She was kind to people who seemed to have no friends or family to turn to.

“It is now time for those who cut her down in the prime of her life to face the truth.

“Once again I appeal to our community to come together to expose the truth around Lyras tragic death.

“Come forward and tell police what you saw or heard on the days before, on the night in question and in the days after. Do the right thing.”