The bottle bore an unusual name. 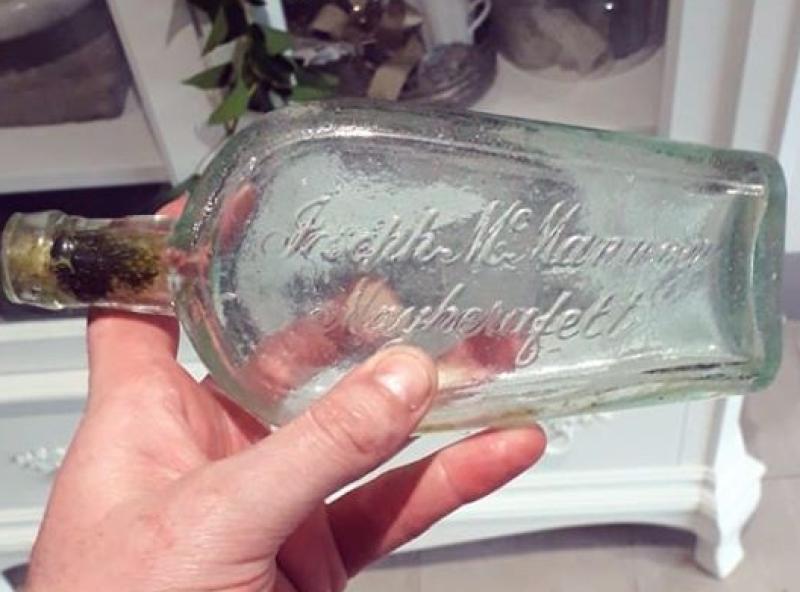 Locals have been left perplexed after a glass bottle washed up on the shores of Lough Neagh bearing a name of which no trace can be found.

Castledawson man Dean McErlean made the discovery while walking his dogs at the foot of the Moyola River, where it enters Lough Neagh.

“It says ‘Joseph McManmoy’ on it,” he told the County Derry Post.

“We would take the dogs down there for a walk and let them swim and we found it lying in the sand. It was half-buried but I saw the top of it.

“It doesn’t look like a medicine bottle – it’s clear. I knew it was old glass because you could still see the bubbles in it, and it wasn’t symmetrical.

“I knew it was a good age, but I didn’t know what it was for, whether it was for whiskey or medicine or anything.”

Dean then took to the internet to see if he could unearth any details about the mysterious ‘Joseph McManmoy’, but his search drew a blank.

“The first thing I did was Google it, but there was absolutely nothing and no name the same. It’s not a usual name.

“The name has thrown everybody that I have asked because it’s so unusual.”

The search for any trace of the name is still ongoing, but Dean has ensured the bottle has found a safe home.

He said: “An aunty of mine is big into traditional, vintage, oddly shaped stuff.

“She would have wee medicine bottles and stuff around the house, so I took it home to her. She loved it, she was like an excited child.”

While his efforts to find Mr McManmoy have not yet proved fruitful, Dean has his own theory about how the bottle came to rest on the Loughshore.

“I would say it has come down the Moyola and washed out in the floods over the wintertime. God knows how long it was lying somewhere else.”