All-Ireland winning musician spreading the joy of music during lockdown

Caitríona has been posting videos of her music on social media. 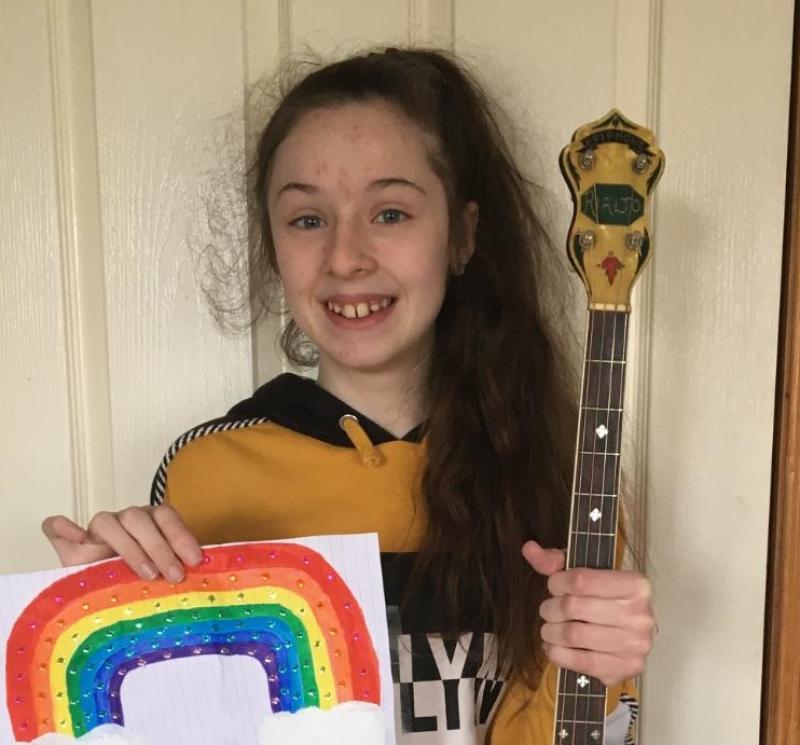 Caitríona has been encouraging people to create rainbows to spread positivity.

A County Derry teenager has been sharing her love for music online as she tries to spread some joy and keep people connected during the Covid-19 lockdown.

Caitríona Lagan, from Castledawson, won the U12 All-Ireland mandolin title at the 2018 Fleadh in Drogheda and is usually found playing at a session every weekend.

Due to the measures in place to curb the spread of coronavirus, however, she has ploughed her efforts into performing online and sharing much-needed positivity.

Caitríona told the County Derry Post that it was vital to keep people’s spirits up at this time.

She said: “I think it’s very important to keep playing because it can cheer people up and help them to take their minds off things. It makes them feel better.

“It’s nice to keep children happy and, instead of all the technology, give them something else to do as well.”

The 13-year-old recently posted a video of her playing a few tunes for the children of Kilronan Special School in Magherafelt.

Her mother, Roisín, said Caitríona had a great fondness for the children at Kilronan, having held charity events and performed there before.

She said: “After she won the All-Ireland, we didn’t really get a chance to play any events, so for her 13th birthday she wanted to have a big session.

“We don’t have any connections with Kilronan or anything, but she had met a few children at sessions who went to it.

“She did a charity night and then was invited up to the school and the summer scheme, so she’s been up and they know her.

“She decided, in order to keep her practice up, she would share some videos online. It’s a good way for her to practise and it’s good for her confidence too.

One thing that Caitríona will miss out on this year is the annual series of Fleadhanna – county, provincial and All-Ireland – which have had to be cancelled due to the coronavirus.

She said: “I’m a wee bit disappointed because I love going to the festivals because the atmosphere is so good at them.

“I’m using the time to catch up with my schoolwork, take my dogs for a walk if I can, do a wee bit of painting, bake at some point, practise my music.

Caitríona’s mum Roisín said that social media has been a godsend for the music community during this time.

“At the minute it’s the only way people are able to connect. A lot of Caitríona’s friends would be in the music scene, and she would be at sessions every week, so she’s missing that.

“With the Fleadh not being on this year, there’s going to be a massive gap. We normally plan our whole year around the fleadh, so the music is great for everyone to keep spirits up.”

Caitríona is certainly helping to keep spirits up, and Roisín said a few children had already been in touch via social media.

“A wee boy this morning sent her a rainbow, so hopefully they keep coming and keep children and adults occupied.”