Bellaghy woman on life at the heart of Italy's coronavirus lockdown

A County Derry woman living in the Italian city of Treviso has revealed what life is like after the complete lockdown of the country. 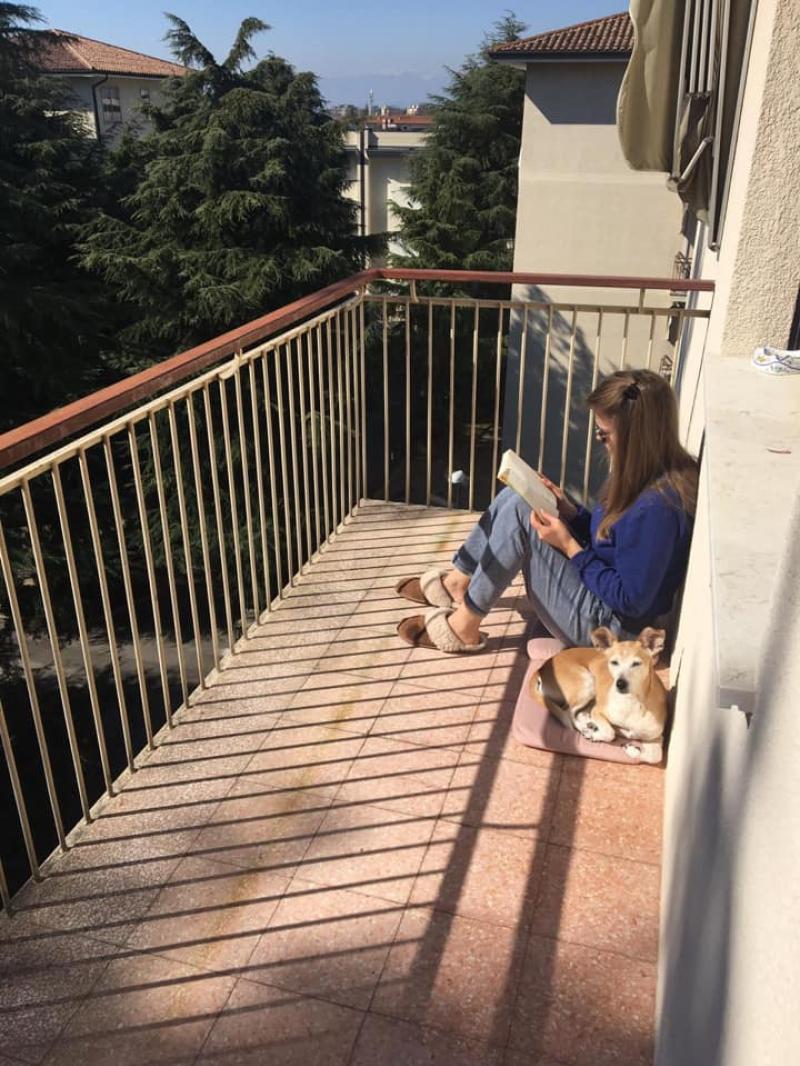 Bellaghy native Cordelia McKinley spends time on her balcony during the lockdown in Italy.

A County Derry woman living in the Italian city of Treviso has revealed what life is like after the complete lockdown of the country.

Bellaghy native Cordelia McKinley has been living in the city for six years and described its current atmosphere as ‘surreal’.

“The days are pretty monotonous,” she told the County Derry Post.

“Even though we were in quarantine for four days at the beginning, they still had open restaurants, bars and cafés.

“Even though we were being told to stay away from each other, they still had a lot of those places open. Then on Thursday the 12th it went into lockdown.

“The supermarkets had a ‘one out-one in’ policy and the shop itself was really quiet, but fully stocked.”

The panic-buying gripping shoppers in the UK and Ireland has not been an issue in Treviso, with supermarkets operating strict social distancing conditions in stores.

Cordelia said: “We haven’t seen any of the panic-buying that’s been going on at home.

“On the Sunday when they announced the quarantine, we did our weekly shop and it was definitely busier, but there weren’t people with seven packs of toilet roll or anything like that.

“I don’t know if maybe at home you have the bigger newspapers stirring things up, but it never really happened here.

“All the supermarkets are totally full, but when we go, we have to be at least a metre apart from each other. They make sure there’s no more than 2 or 3 people in the same aisle.”

The NI Executive closed all schools from last Friday after a week-long clamour for an all-island approach, but Cordelia feels closing the schools before quarantine in Italy was a mistake.

She said: “The schools had been closed three weeks before quarantine, which was actually a really big problem and why it spread so badly here.

“Grandparents were looking after grandchildren because parents still had to work, not knowing the children were actually spreading it. They don’t have any symptoms; they don’t really get it.”

“On the Wednesday night, the Italian Prime Minister said absolutely everything must be closed, except supermarkets and pharmacies. That’s all that’s open. It’s very surreal.

“The crazy thing is that the escalation period is so short, it suddenly comes up on you.”

With stricter measures accompanying the full lockdown, there are punishments to deter anyone from ignoring them.

“You are not allowed out – you can actually be fined €200 if you’re stopped and don’t have a good reason,” says Cordelia.

“Here in Italy, businesses weren’t told: ‘you can close but it’s on you’. They were told: ‘you’re closed, that’s it’ and so the government has to support them.

“The Mayor of Treviso even posted that they had had to shut down a café in the train station because it had continued opening as normal on the first day of the lockdown.

“They shut it down and issued a €5,000 fine. They’re taking it really seriously.

“To be honest, the only people we see out are other dog walkers. Newsagents are open as well - you often see people going to get their newspaper.

“Everyone is keeping their distance from each other and looking at each other really suspiciously. It’s a weird environment.”

Figures in Italy show that the death toll is continuing to rise, despite the imposition of the current lockdown, but Cordelia says its impact is yet to make a mark on the data.

She said: “All these people who are dying now caught the virus 2-3 weeks ago.

“That’s still ongoing and the lockdown has only been since last Thursday, so people have only been isolating for a week.

“It will probably take a while for all those people who were infected before that time to either die or get better.

“I imagine it will take another week or so to plateau and then hopefully start dropping.”

As with here at home, people are looking out for the more vulnerable members of their communities, something that is crucial with Italy’s elderly population.

Cordelia says that although social distancing is keeping people apart, they are coming together in other ways.

She said: “A lot of people have been posting saying to ask your neighbours if you need any help.

“Italy is the second oldest nation in the world in terms of average age. 25% of the population is over 65. I’d say over 85% of people in our apartment block are over 70.

“The family in Italy is such an important thing and people are particularly good at looking after the older people.

“One of the women who lives on our floor is 83 and she’s been really kind to us, so we got her groceries a few times now.

“Whenever we’re popping over, we ask if she needs anything. People have been really good.”

Treviso is almost 1,400 miles from Bellaghy, but the compulsion to help the vulnerable travels well.