Three men and a teenager appear in connection with 'disgraceful incident' 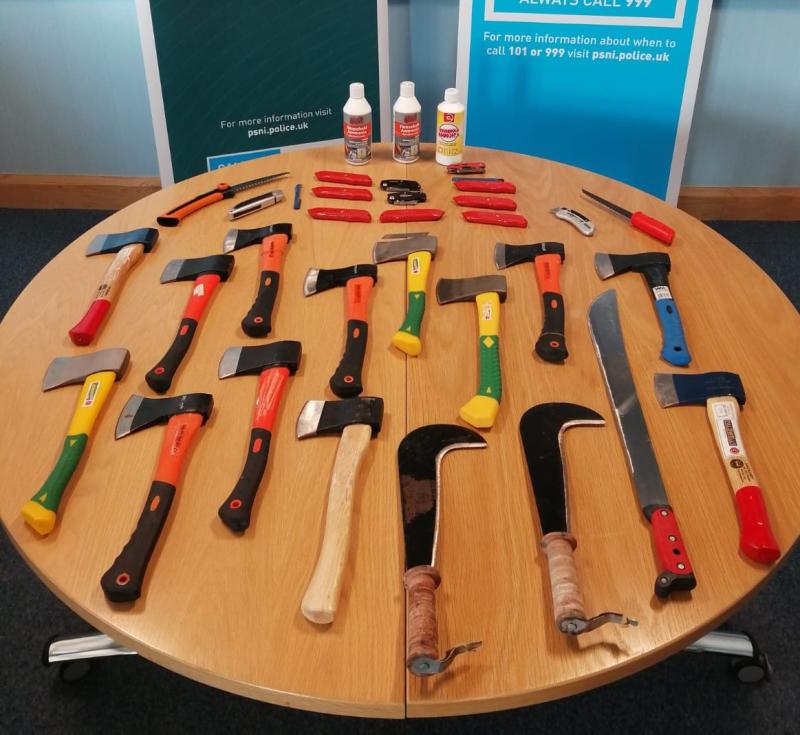 A police photo of the weapons seized following yesterday's incident.

Three men and a 17-year-old youth today appeared at Derry Magistrates Court charged in connection with incidents at a funeral in Strabane yesterday.

John Anthony Doherty, 32, with an address at Riverside Caravan Park in Queensbury in Wales, was charged with possessing a Stanley knife, possessing cocaine, driving without insurance and having no L plates.

A third man, Thomas Scully from Ballybofey, also appeared and the court heard he was arrested before he could attend the funeral.

All of the offences were said to have occurred on February 27.

Doherty pleaded guilty to his offences.

A police officer told the court that police were on duty at a funeral in Strabane due to public order concerns and intelligence.

They stopped a number of vehicles, one of them driven by Doherty and found the defendant in possession of a Stanley knife.

He also had a small quantity of cocaine and was found to be driving without insurance and no L plates.

At interview, Doherty said he had the knife to repair fences and had forgotten it was there.

Defence solicitor Keith Kyle said his client lived in Wales and was attending the funeral as he had been in the company of the deceased recently.

He said it was the first time in this jurisdiction and he had no record here.

District Judge Barney McElholm said this was 'a disgraceful incident' and said as far as he knew one group was attending the funeral and were attacked by another.

He said it appeared all the items seized by police were brand new and bought for the event and if it was not for the 'prompt action of the police there could have been a blood bath.'

Doherty was sentenced to five months suspended for 3 years, fined £425 and disqualified for 12 months.

As regards Stokes, the police officer said it was in connection with the same funeral and added that at around 11.30am the defendant was seen in the car park of the church discarding a meat cleaver under a parked vehicle.

When police questioned him, he said he took it off another person but refused to say who and was getting rid of it in case someone got hurt.

A defence solicitor said his client claimed the weapon was a barley thresher.

Judge McElholm said that there was a lot of barley in Strabane main street.

The solicitor said his client had been at the funeral and heard the commotion outside which he felt was disrespectful.

He added that Stokes went out and saw someone with the weapon and took it off him in case someone got hurt.

The solicitor said there was no suggestion Stokes was brandishing the weapon or anything like that.

The judge said that 'it was plausible ' what Stokes was claiming but it was clear that 'some people came armed to do serious harm to others.'

Stokes was sentenced to three months suspended for 12 months.

A third man then appeared and the court was told he was to attend the funeral but was arrested before he could.

Thomas Scully, 18, from Donegal Road in Ballybofey was charged with being disorderly in Altnagelvin Hospital, possessing a knife and possessing a screwdriver in the early hours of February 27.

A police officer told the court that in the early hours of the morning police in Strabane were tasked to locate a man having a psychotic incident.

They arrested Scully and took him to Altnagelvin where he was abusive to staff and police.

He was then searched and a screwdriver and a knife was found on him.

He told police the screwdriver was for repairing kitchen cabinets while the knife just happened to be in the pocket of a jacket he had borrowed.

The court was told that Scully was to have attended the same funeral but was in custody before it.

A defence solicitor said he accepted that he had possession of the screwdriver.

Scully was sentenced to three months in prison suspended for two years.

Meanwhile, a 17-year-old youth with an address in Belfast appeared charged in connection with the same funeral.

The youth was charged with two counts of possessing an axe on February 27.

A police officer told the court the youth was the passenger in a car which was stopped and a holdall containing the axes was found at his feet.

He said the axes were his bought by his father in order to start a gardening business.

Bail was not opposed and the youth was released to appear again on March 20.