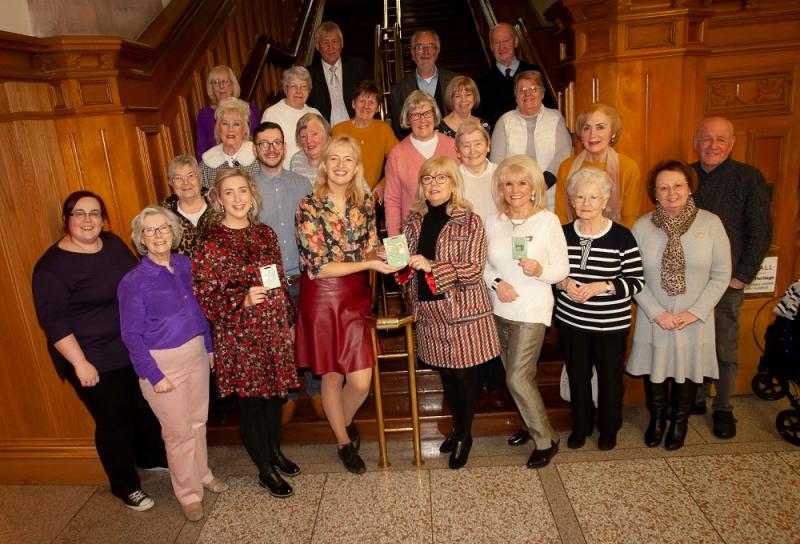 Derry's former 'factory girls' gathered in the Guildhall on Friday for a special musical trip down memory lane.
The factory girls, and some boys, sang some of their old favourites in memory of their days spent at their machines.
Roy Arbuckle led the sing-along with favourites such as Hills of Donegal and Lovely Derry on the Banks of the Foyle.
The event was just one of many events over the past two years to commemorate the factory girls and their work and the girls hope there will be many more to come in the future.
Ruth McPhillips is events coordinator for the Tower Museum and since being appointed thre months ago, she has already had a huge impact on protecting and recording the factories' legacy.
“I'm brand new in the door but I have to say that working on this project has been a blessing. I feel like have to keep reminding myself that I'm actually at work because of the laughs and carry on,” she said.
“I feel like I've been cheated and made to grow up in the 21st century - I think I would have fitted in well with the factory girls, and of course the men too!”
Blaine O'Donnell is working with Ruth to create a podcast capturing the stories of the factory girls.
“That heritage needs to be encapsulated and brought forward to future generations. There is a gap for something there, be it a heritage center or education center to keep the stories alive but this is a great way for that to start,” he said.
Ruth says they have been inundated with stories from the factories and they are still calling out for more.
“We had originally planned to release a podcast episode once a month but they way things are looking now, we might be releasing one once a week! The Derry women are great talkers so we have plenty of stories already but I don't think you could have too many stories like these,” Ruth added.
Mayor Michaela Boyle said that the Herstory project was one of her favourites from her time as mayor.
She also revealed that she has more in common with the girls than they previously thought.
“I'm proud to say that I, myself, was a factory girl. I started out in a pyjama factory in Crossmaglen,” she explains.
“We all come from a long generation of factories. If you didn't work in a factory yourself, you certainly had a member of your family working in one,” said the Mayor.
Although the factorys were famous for its girls, there were some boys working there too.
Adrian Ross, who was a manager in one of the factories, explained how he came to work there.
“This city wasn't known for it's employment of men but I got the chance to work as a box boy for three pounds 12 and six a week.
“That doesn't sound like anything today but it was a lot of money then. Over the years then I worked my way up and eventually became factory manager.
“We had a great work force, to be honest with you. They were very highly skilled, it was second to none.”
Adrian was not the only person to acknowledge the skill of the workforce.
Factory Girl Hazel Rutherford said: “I do miss the factory days but I could never do it now. I don't even think girls these days could do it now - it was backbreaking work. The craic was great but it was also really hard work.
“That being said, sometimes we would put the record player on when the owner left the room and we would all start jiving and there would be girls smoking in the toilets and everything! It was tough but we all loved it.”