The new zones have been added to 14 existing zones 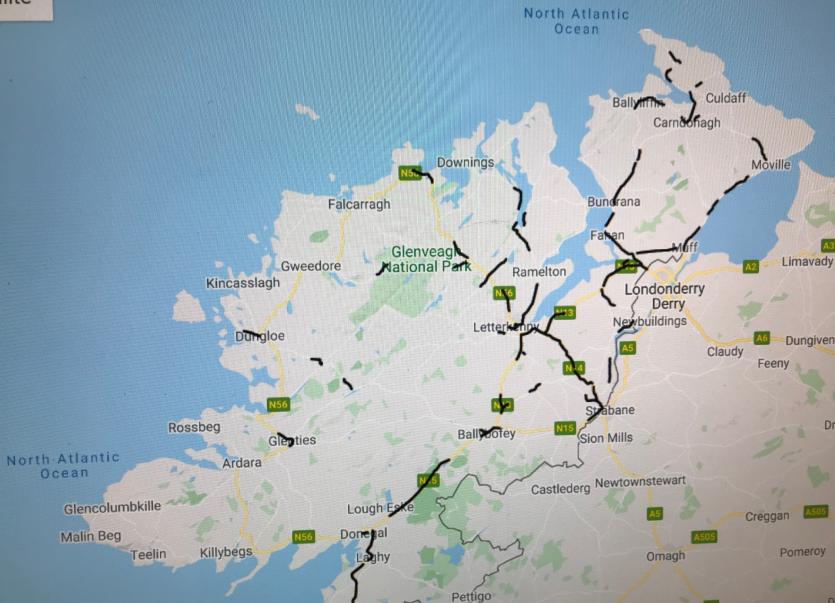 The location of the new speed

The introduction of the new zones means there are three more safety camera zones on roads across Donegal.

The safety camera zones are in areas where there is a history of speed-related collisions. The new speed enforcement zones are policed using marked speed vans.

The 46 new zones have been added to 14 existing zones. Forty-three zones were removed following an updated collision analysis of the road network based on the most recent available collision statistics.

Eighteen of the new zones in the county are on national roads, 38 are on regional roads, one is on a local road and three are on urban streets or roads.

The speed vans are located on stretches of roads where speed-related collisions have occurred and are located as close as possible to the location of the collision.

“It is important that the offence of speeding continues to receive attention. The GoSafe speed enforcement van is one method, which An Garda Síochána use nationally and in Donegal,” he said.

“The purpose of the safety cameras is to save lives and there is a study that shows that speed cameras do save lives and when you drive at a slower speed you have more time to react to unexpected incidents and it follows on that collisions will be avoided. We appeal to all users to drive at an appropriate speed and make our roads safer."

“There are concerns about speed in Donegal and that has been highlighted on an ongoing basis. Speed is a major concern in Donegal and has been for a long time,” he said.

Mr O’Donnell said the consumption of drink or drugs by drivers is strongly linked to speed on the roads.

“It’s a combination that is deadly and unfortunately in our experience, one does not go without the other. If drivers are under the influence they drive too fast,” he said.

Speed limits are set to encourage motorists to drive at a speed that is appropriate for the road, he added.

“Speed is a killer. Deaths on the roads have decreased over the last number of years and motorists are adhering to the messages we are putting out. Because they are taking on board the messages, the number of collisions are decreasing and we have to thank motorists for that. But unfortunately, there are motorists out there who do not heed the warnings.”