Derry students were among pupils from across the North who took part in the first ever Northern Ireland Anti-Bullying Young People’s Forum at Parliament Buildings at Stormont. 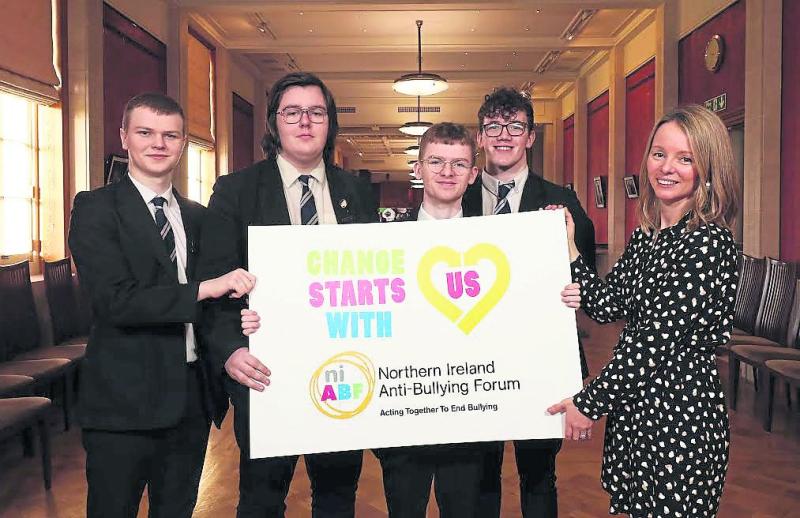 Derry students were among pupils from across the North who took part in the first ever Northern Ireland Anti-Bullying Young People’s Forum at Parliament Buildings at Stormont.

Over 100 young people, aged between 15 and 19 from schools and colleges, came together to consider a range of issues related to bullying.

The landmark event, which carried the theme Change Starts With Us, was organised by the Northern Ireland Anti-Bullying Forum (NIABF), an inter-agency group hosted by the National Children’s Bureau (NCB) and funded by the Department of Education.

Young people in attendance worked in committees and heard about work undertaken to address bullying but it also allowed those young people to highlight issues and make a further call to action for responsible adults to support them in reducing the levels of bullying experienced by them and/or their contemporaries.

MLAs from across the spectrum supported the event which was facilitated by the NI Assembly Education Service.

The Speaker of the Northern Ireland Assembly, Alex Maskey, granted use of the Assembly Chamber for the debate-style event and Education Minister Peter Weir provided the opening statement.

The NI Commissioner for Children and Young People, Koulla Yiasouma, also spoke at the event.

Mr Maskey said: “I am delighted to be able to use my first event as Speaker to open up Parliament Buildings to so many young and new voices on a crucial subject.

“Today is all about giving young people a platform to share their concerns about an issue they see at first hand, and may unfortunately have experienced, to have the opportunity to give their views and suggestions to Members about what more can be done.

“The issue of bullying is connected to so many other areas of major public policy including the abuse of social media and mental health, so it is timely to highlight them in the Assembly Chamber today,” added the Assembly Speaker.