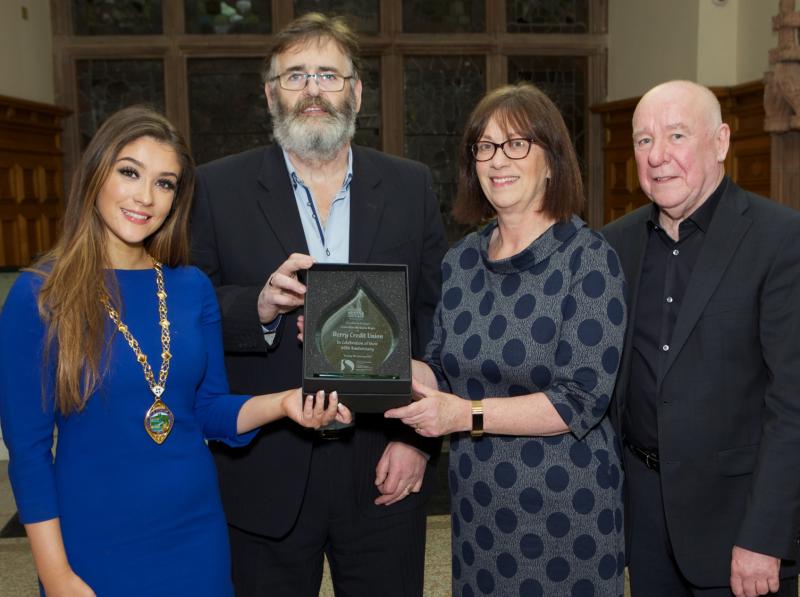 Sixty years ago this year, six young Derry people got together and, with a combined total of £8.10p (in old money), opened the inaugural account with Northern Ireland's first credit union.

Today, Derry Credit Union – whose motto is “For people, not for profit” - has a staff of 40, over 36,000 members with shares totalling almost £79 million.

The Abbey Street financial institution has a number of events lined up to mark its 60th anniversary.

One of the first was held on Tuesday night last when management, committee members, staff and members attended a civic reception held by Derry City and Strabane District Council.

At the event in the Guildhall, hosted by Deputy Mayor Cara Hunter, tributes were paid to the “Derry Six” - Seamus Bonner, George Coyle, Paddy (Bogside) and Eileen Doherty, Paddy Joe Doherty and John Hume – for their “forward-thinking” decision to set up the non-profit-making organisation which, since its inception, has loaned out £606 million to its members.

Cllr Hunter said it was a “delight” to host the civic reception for the Credit Union.

She added: “The Credit Union has enabled so many families and people to be on their feet over the past 60 years. It has been the backbone of the development of Derry.

“Through the loyalty and dedication of its members, Derry Credit Union has flourished to become the success that it is today. I hope its success will continue long into the future.”

Speaking to the Derry News, Joan Gallagher, Derry Credit Union general manager, said she was “absolutely delighted” at the honour bestowed by the Council.

She added: “Derry Credit Union has been a very important institution for Derry and it is appropriate the council mark it with a civic reception.

“This kicks off the start of the celebrations for the 60th anniversary.”

She added: “I only recently realised how young they all were – Paddy Joe Doherty passed away recently at the age of 82, so 60 years ago he was only 22 when they started out on the road to developing the Credit Union.

“I think Paddy Joe was one of the younger ones and having had a look at the ages of the others, there was none of them over 30 and I think Paddy Bogside was the oldest.”

Looking to the future, Mrs Gallagher said Derry Credit Union would “still be here” in another 60 years and Brexit would have very little impact on it.

She said: “Those guys (founder members) gave us a gift and for those of us who are still involved, it is our responsibility to protect that and we leave it in a suitable position to hand on. I do believe Derry Credit Union will be here in another 60 years – for it is part of the city.

“Brexit will have very little impact on us – the members have their shares, have their savings – we will still be able to provie the services we have.

“We have invested a lot over the past number of years modernising the Credit Union.

“At Derry Credit Union, you can come in to the office and do all you business or you can do all your business online.”
Mrs Gallagher revealed membership at the Abbey Street office stretched far beyond the city's boundaries.

She said: “Our members are not just in Derry – we have members in America, Australia and a number of other countries – we are a sort of worldwide organisation now. We have an e-banking platform on which you can apply for your loan at night, we look at your loan application in the morning, we will send you an SMS text to sign and we will have your money in your account that day.”

Mrs Gallagher stressed Derry Credit Union was “not a bank.”

She said: “We will never be a bank. What distinguishes us is that we have 10 operating principles which we very closely adhere to. We are a not-for-profit organisation – the banks are for profit and they look at every opportunity to maximise a return for themselves.

“We charge an interest rate which is very reasonable and we have a rebate on that – once we cover our costs, we give back what we have left to our members.”

Mrs Gallagher said Derry had become a very different place thanks to the Credit Union.

She said: “Since our inception we have loaned out £606 million – if you take that out of Dderry, what would it be?”

Colm McCauley, treasurer, said it was a “great honour and privilege” to be honoured with a civic reception, the first of a number of events planned to mark the landmark anniversary.

He added: “There will be a number of events throughout the year and this is one of the first – it is great it is happening.

“Hopefully, the Credit Union will grow. We don't keep our heads buried in the sand, we are always thinking strategically at how we can consolidate – we cannot just standstill and we do have a strategic plan to carry that on.”

Mr McCauley pointed to the financial situations many people found themselves in at the time the Derry Credit Union was formed as to why so many in the city – over a third of its population – were members of the local institution.

He said: “You need to go back a bit when credit facilicities for a large section of the population in Derry were virtually non-existent. The Credit Union was born out of that and it has grown ever since – it is not a profit-making organisation and any surplus goes back to the members.”

He said: “It is virtually unheard of that a credit union established 60 years ago has achieved the volume of growth that Derry Credit Union has – it is very appropriate and we are delighted to be invited along to this civic reception.

“Those people (founding members) were very young by today's standards and they took the brave step forward and had the vision for the benefit of the community.

“It is a very emotional time. There have been a lot of people involved from the absolute origins, right through the decades to this very day.

“We currently have a board of directors who volunteer and give up their time freely and willingly.

“The world has changed greatly and the Credit Union has had to move to stay up with those changes.”

Mr Hegarty said there would be a “lot of families” who would find it much different without the Credit Union.

He added: “They would find it very difficult when it comes to key things in their lives, from simple things from birthdays to Christmas, to the education of their children, needing a bit of work done to their house, needing a new car.

“I am not talking necessarily needing a big help but when they do need a bit of help, there is an organisation there for them.”

Helen Kivlehan was one of the Credit Union's members in attendance. She said she has a member almost since its inception and revealed what her first loan was for.

She said: “My father enrolled us as children and I went on to become an adult member. My first loan was for my wedding. My husband now and I were both members and we both saved in the Credit Union towards our wedding because in our day our parents couldn't really afford it.

“We saved up and borrowed the money against our savings and then paid it off.”

Mrs Kivlehan said Derry “wouldn't be the place it is now without the Credit Union.”

She added: “It is a lifesaver for people like my mother and father, who was a docker.

“The Credit Union has been very good to me. I have been able to provide education for my children and my grandchildren are all now in the Credit Union and it should be something that is passed on.”

Orla O'Doherty, a member of the youth committee, encouraged young people to get involved in the Credit Union.

She said: “It is a good experience and helps build confidence and to learn new skills.”

How it all began

The Credit Union Movement was introduced in Ireland in 1958 by Nora Herlihy with the support of a number of other dedicated pioneers.

The experience of most people in Derry in the 1950s and early 1960s was that of high unemployment.

Banks and other financial institutions did not advance credit without substantial collateral or guarantees - you had to be a homeowner in order to get a loan and very few people owned their own homes in the late 1950s.

Money lenders charged exorbitant rates of interest perpetuating the cycle of hardship. Consequently, the ordinary working class people in the city had only very costly sources of credit available to them.

Derry Credit Union was founded by six individuals whose commitment to their community is beyond refute.

Six locals - Seamus Bonner, George Coyle, Paddy (Bogside) and Eileen Doherty, Paddy Joe Doherty and John Hume - believed the credit union could be a source of fair and reasonable credit for the ordinary man and woman.

They met in a house in the Bogside on October 16, 1960 to combine their total savings of eight pounds ten shillings to establish the first credit union in Northern Ireland - and only third on the island of Ireland – a move that changed the fortunes and futures of generations in Derry people for the better.