There was a dramatic end to this year's Credit Union Schools Quiz in Derry on Monday evening. 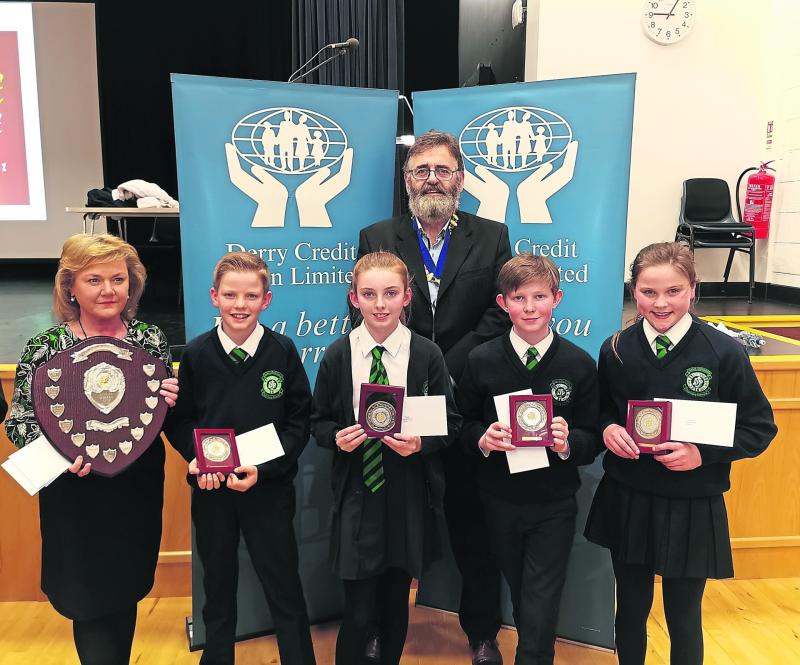 The St Patrick's Primary School team which won the under-13 category in the Credit Union Schools Quiz on Monday.

There was a dramatic end to this year's Credit Union Schools Quiz in Derry on Monday evening.

Forty one teams from schools across the city took part in the quiz at St Mary's College.

It was a nail-biting finish with both the under-11 and under-13 categories going to tie-breaks to decide the winners.

And it was St Patrick's Primary School in Pennyburn which emerged victorious in both categories.

The annual quiz, which is run by Derry Credit Union, always proves popular.

This year was no different with the main hall at St Mary's packed with young quizzers and their families.

This meant that a tie-break was needed in which St Patrick's Team 1 emerged the winners.

In the under-13 category, there was a three-way tie at the end of the quiz between Lumen Christi Team 1, Lumen Christi 2 and St Patrick's Team 10.

In a dramatic end, it was the St Patrick's team who got the tie-break question correct to secure victory over their illustrious grammar school opponents.

The top two teams in each category now go forward to the next stage of the competition in Donegal at the end of February.

The top two teams in each category at that stage will then qualify for the national Credit Union Schools Final in Dublin in April.

Read also: Why not check out the pictures: Derry Credit Union Schools Quiz