Panels were vandalised last summer - but have still to be replaced 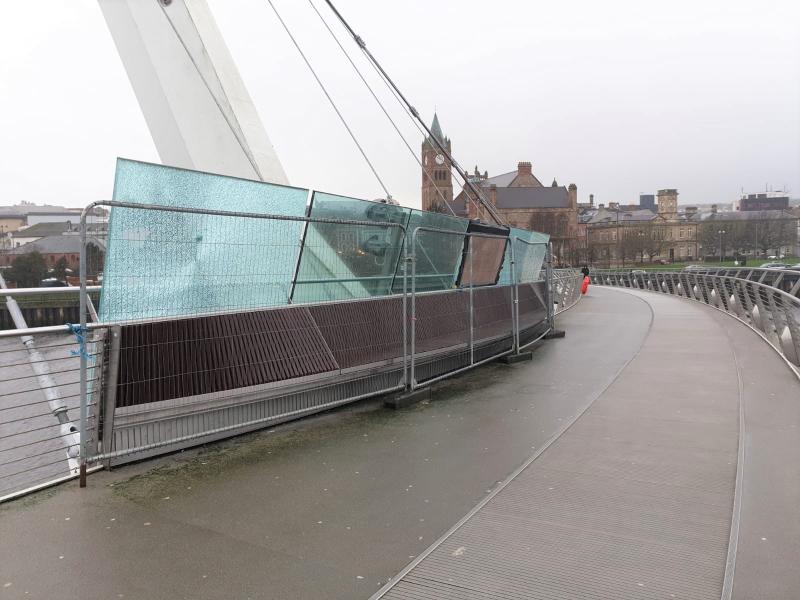 Questions have again been asked over delays in replacing smashed glass panels on Derry's Peace Bridge.

The panels on the bridge were vandalised in July 2019 and have still to be replaced.

The Department of Infrstructure (DfI), which is responsible for the maintenance of the bridge, said in October of last year that it had planned to have new panels in place by the end of November.

However, that work has not been carried out.

Last year's vandalism was the latest in a series of attacks on the glass panels on the Peace Bridge, which opened in 2011 and is used by hundreds of people each day.

The delay in repairing the damage caused by the latest attack was discussed yesterday at a meeting of Derry City and Strabane District Council's Environment and Regeneration Committee.

During the meeting, Sinn Fein councillor Christopher Jackson said the council had recently received a letter from the Infrastructure Minister Nichola Mallon which stated that the repair work was to be carried out on the bridge.

However, he said that the work had not yet been carried out and asked that another letter be sent to the Minister.

He said that they should not let the Peace Bridge repairs 'slip off the agenda'.

A council officer told the meeting that she would follow the issue up with the Divisional Roads Manager as it was their department who would be undertaking the bridge repairs.

The officer said she was aware that they had appointed a contractor to carry out the work before the coronavirus crisis, and that it may have been the pandemic which had delayed the work being carried out.

She said that if councillors agreed she would contact the Divisional Roads Manager to find out what the situation was.

The officer added that if there was any issue or delay, then the council could then write to the Minister about the bridge repairs.