Marathon will be back 'bigger and better' than ever

Organisers have promised that the Walled City Marathon will be back 'bigger and better' than ever before in 2021, after having no choice but to cancel this year's event 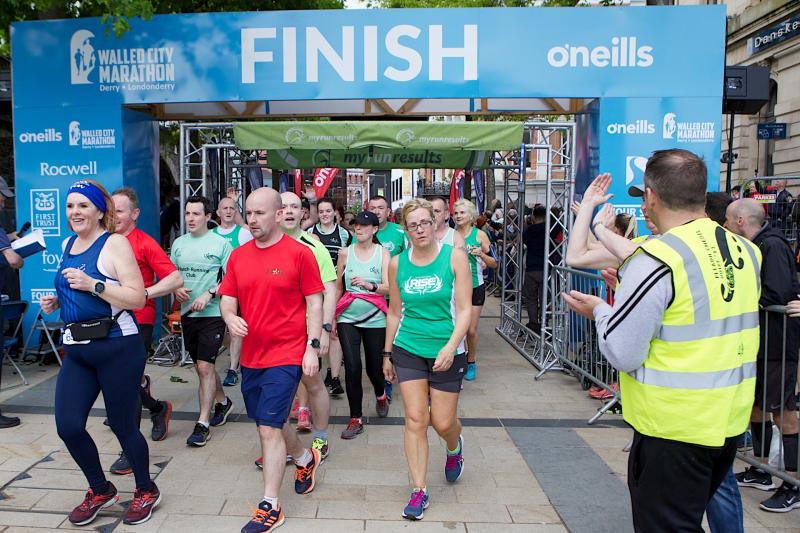 NOT FINISHED.... The Walled City marathon has been a key event in the sporting calendar locally since 2013.

Organisers have promised that the Walled City Marathon will be back 'bigger and better' than ever before in 2021, after having no choice but to cancel this year's event.
There was great shock locally at the weekend when organisers revealed that they had taken the decision to cancel the 2020 marathon, a decision they had taken with 'regret', stating 'a number of factors' in their decision.
The spokesperson for the marathon said: “It is with regret that organisers of the Walled City Marathon have taken the decision to cancel this year’s marathon event, originally scheduled for 31st May 2020.
“The race has been cancelled due to a number of factors outside the control of race organisers. We would like to thank all supporters of the Walled City Marathon and hope that they will continue to support the event next year. All entrants will be provided with a full refund within the next 14 days.”
The Derry News understands that the main factor behind the decision to cancel the event, was a slow uptake on registration for the marathon.
Since it began in 2013, the Walled City Marathon has attracted thousands of runners, from Derry and beyond, with consistent numbers of around one thousand on the day itself. However, with this year's event scheduled for May 31, the numbers registered so far have fallen dramatically, especially from local runners, forcing the committee's hand.
A member of the organising committee explained that whilst many more were expected to register in the coming weeks and months, the fact that numbers were low at this point was unfortunately decisive.
“We're disappointed that it didn't happen, but we're positive that we can get it back on track next year, the spokesperson said.
“The response has been very encouraging and we have already received some excellent ideas from people. The plan is to bring it back bigger and better. We will be talking to people in the running fraternity who have been in touch and we will be working with them going forward.”
Another factor in the decision was the lack of a headline sponsor.
In recent years the event has been supported by SSE Airtricty and O'Neill's and despite significant support from local businesses, the lack of a main headline sponsor contributed to the decision.
Next year will be the 40th anniversary of the first ever marathon in the city, and the spokesperson admitted that fact will be the catalyst for the resumption of the event, with work already being done to ensure its continuation.
Talks have already started with Derry City and Strabane District Council and 'the appetite is there on all sides to ensure that the Walled City Marathon has a future'.
“We're gutted it has happened because it's such a great event. The comments we get from the visitors, not just about the marathon, but about the people and how well they are looked after when they are here, it's incredible. It really is a popular event.
“It's one of the good news stories in the town and it would be a pity if we lost it. I think it will be back next year but we need to put in a lot of work for that to happen. It will be back and the plan is for it to appeal to more people locally and it will allow people to get the feel for a big city race.
“The organisers are overwhelmed with the support they have received on social media, and messages of support about trying to get the event back next year. All the stops are being pulled out to make sure it does.”
The official statement released on Friday continued: “We are encouraged by the continued growth of the 10-miler which sold out in record time this year and we look forward to further building on that event whilst working to prepare for the marathon again in 2021.
“We want to thank you again for your continued support and look forward to welcoming you all at the start line next year.”