March follows the route of the 1972 protest 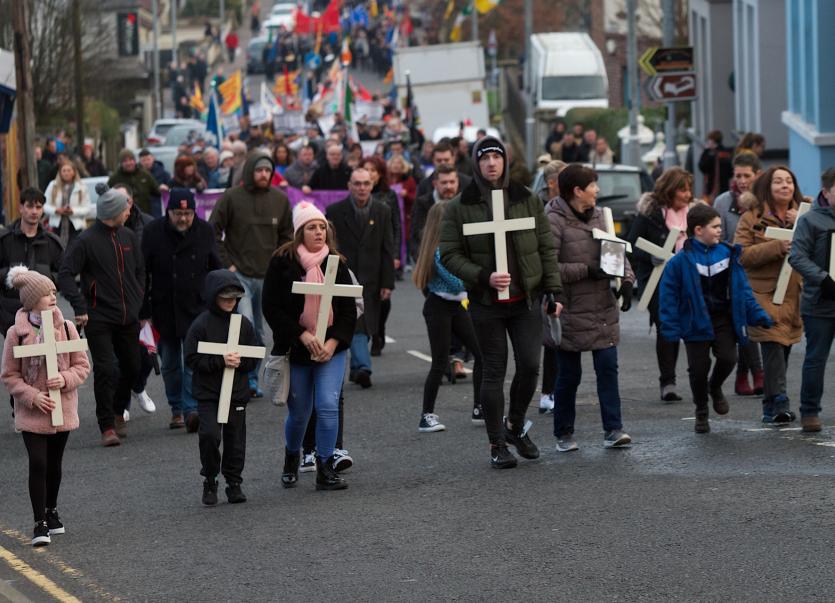 Some of those on the march. Photo by nwpresspics.com

Several thousand people today marched from the Creggan to the Bogside to mark the 48th anniversary of Bloody Sunday.

Thirteen unarmed civilians were shot dead by British paratroopers on January 30, 1972, during a demonstration organised by the Northern Ireland Civil Rights Associaiton.

Fourteen others were wounded, including one man, John Johnston, who later died of his injuries.

Today's Bloody Sunday March for Justice was the first since it was announced that only one British soldier was to be charged in connection with the killings and the wounding of the injured.

While several court hearings have taken place since it was announced by the Director of Public Prosecution in March last year that the former paratrooper, known as Soldier F, was to face two murder and four attempted murder charges, he has yet to appear in person in court.

Headed by 14 people carrying large white crosses, yesterday's march – as did the previous 47 - retraced the original route of the ill-fated 1972 march, from the shops at Central in Creggan to Free Derry Corner in the Bogside.

It took march just over 10 minutes to pass a particular spot.

A total of six bands took part, including the newly-formed Roberts-Mellon Republican Memorial Flute Band and two bands from Glasgow.

As a mark of respect, the bands ceased playing on reaching the City Baths at the top of William Street and continued with a single beat until passing the Bloody Sunday monument on Rossville Street.

Kate Nash, whose 19-years-old brother, William, was one of those shot dead on Bloody Sunday and with whose murder - and that of William McKinney - Soldier F is being charged with, told those present 'the road to justice is like crossing a field of broken glass'.