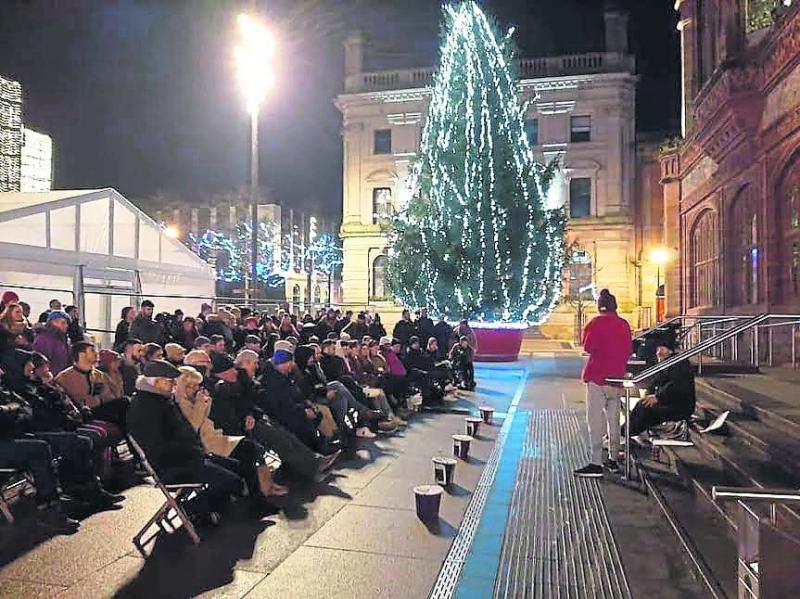 Brief Synopsis: Closed Shutters was staged on the steps of the Guildhallin the run up to Christmas in aid of those facing hardship the city.

Organisers of what has been described as a “magical evening” in Derry city centre have spoken of their pride at how the local community supported an event aimed a easing the lives of those in the city facing hardship.
Derry has always been known as a city that comes together when times are hard. A city that shows fantastic community spirit. The night of 17 December was no different.
That was the night a group of local artists decided to give something back and did so by way of a “site specific performance” of a new drama performed on the Guildhall steps to an overwhelming audience of support.
Brief Synopsis: Closed Shutters is a tragic comedy full with social commentary, spoken in a Derry voice but has a global resonance.
It is a story of three homeless alcoholics, set at the mouth of Christmas and takes place over 12 hours in their lives.
The creative decision was made to perform the piece outside, as the team wanted the story to resonate with the audience. Let them feel the cold. This is what is faced by many people on our streets nightly.
Preparations began in September, with the assembly of the creative team and rehearsals. From the very beginning, everyone involved in the production made a collective decision to waive any fees. Everyone devoted their time and energy for nothing in order to give as much back to the community as possible. 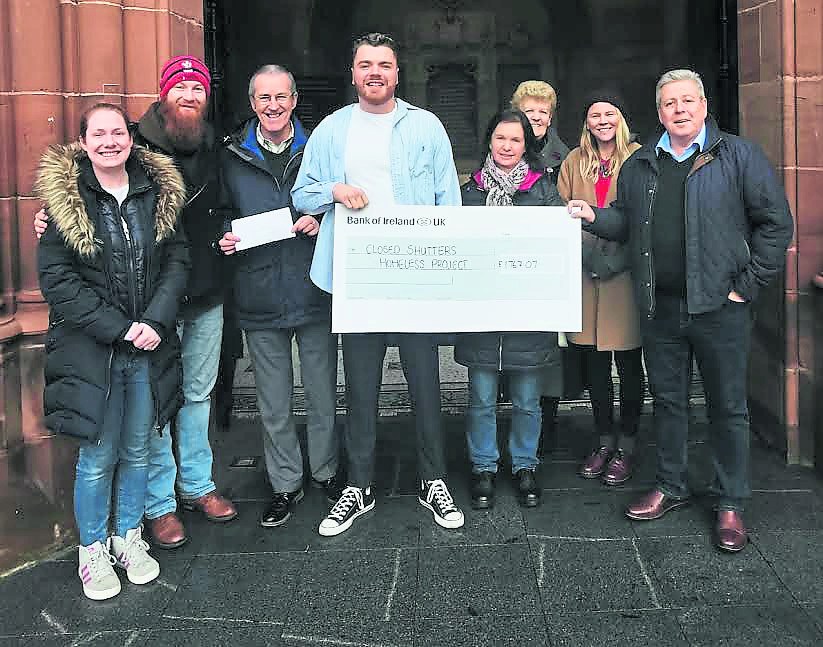 Call outs went out on social media asking for donations of cold weather items; hats, coats, scarves, gloves, blankets, sleeping bags… the list goes on.
As well as the physical items, the team set up a gofundme page to raise money. They were not expecting the response they got! In the lead up to the event, as word started to spread about what was happening, the donations began… and they didn’t stop.
The team reached out to the North West Methodist Mission first and were delighted when they agreed to come on board and help out, donating £300 worth of brand new sleeping bags, all to be distributed to the homeless.
As well as this, they provided all of the props needed and transport on the day.
By way of a thank you for their kindness, North West Methodist Mission then received 18 bags of cold weather gear, as well as bags of food, toys and blankets. All of which went straight to those in need.
A gofundme page raised £715 which, in turn, was given to the North West Methodist Mission, to repay the investment they had made in the project, plus some extra.
On the day of the performance, volunteers gathered around the city centre with collection buckets, while others gathered bags of cold weather items in the Guildhall.
The total raised on the night was £1,080 which was then split between and recently presented to two local charities who do great work within the city - Derry Well Woman and Foyle Food Bank receiving £540.
JP Conaghan, director, said: “To say the support was overwhelming is an understatement. The people showed up and witnessed our gift. They humbled me to a level words cannot describe. I want to say a massive GRMA agus GRÁ MÓR to each and every one who donated so kindly a week before Christmas.”
The team have extended a heartfelt and huge thank you to everyone who supported the project in any way, whether that be by donation or by turning up on the night and sitting through the cold and wet air to watch the performance.
Fiona McLaughlin, pro- ducer, said: “We cannot thank everyone enough. We never thought we could have this much of an impact. It just goes to show you what can be done if we all give a little of our time to those less fortunate. Derry City you are beautiful! Although the project may have come to an end, the homeless epidemic in our city has not. Don’t let this be the end.
Andrew Doherty, writer, said: “With Small charitable acts of kindness, we as a community avoid falling into the pitfalls which are destroying our community. Together we raised £1,767, and hopefully through word of mouth, social media and mediums like this, the project can continue to make a difference and the pos- sibilities are endless.”