The St Pius X College pupil raised the phenomenal five figure amount to aid research into the disease after relative's diagnosis, and losing a childhood friend. 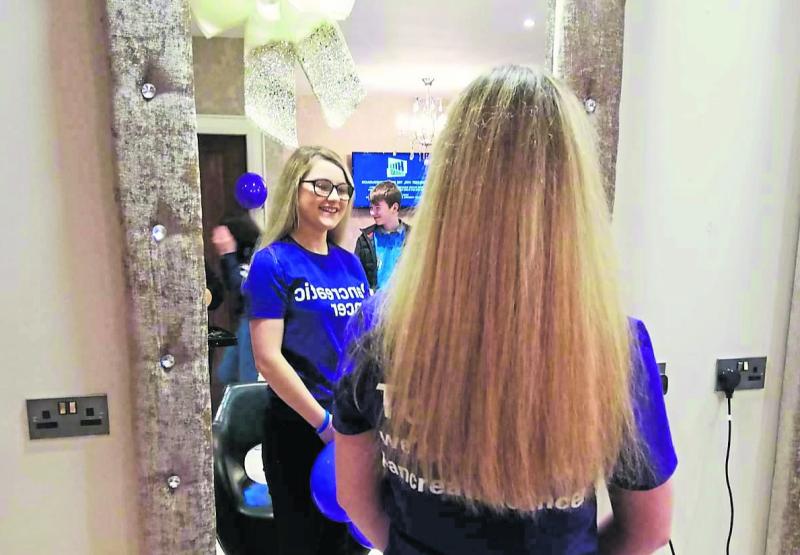 As part of her extensive range of fundraising efforts, Naoishe Devlin decided to have her lovely long locks chopped off to raise money for research into cancer

When a close family member was diagnosed with pancreatic cancer in March 2019, Ballyronan schoolgirl Naoishe Devlin had a plan: to raise £1,000 for research into the deadly disease.

Ten months later - through a combination of imaginative fundraising activities and generous donations from friends, farmers and a leading businessman - the 17-year-old has blown her target out of the water.

The Year 14 pupil at St Pius X College in Magherafelt says she was inspired not only by cancer arriving at the door of her own family, but by the death from cancer of a childhood friend in 2016.

“This girl and I grew up together in Ballyronan and were in the same class at primary school,” Naoishe explained.
“Her family moved away some years ago but we kept in touch and her death hit me very hard.

“So, when my close relation was diagnosed with cancer last year, I thought it would be great to do something not only to help fund research for his benefit but as a tribute to my friend at the same time.”

The local farming community has also rallied to the cause, with generous contributions from farmers attending the livestock markets in Swatragh and Ballymena. 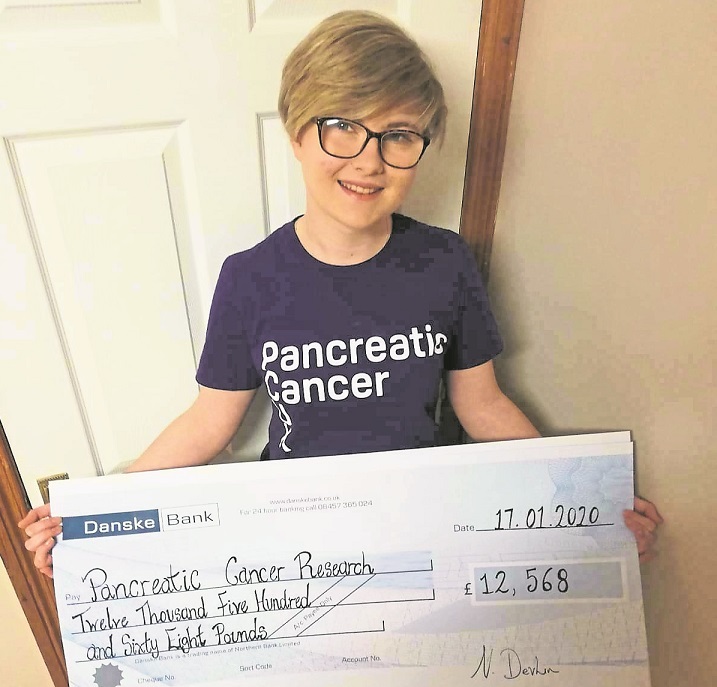 Naoishe with the final total raised after a year of fundraising.

Ballyronan residents stumped up willingly during a door-to-door collection while a second raffle, organised by Francis Connon from Kells, helped swell the fundraising coffers.

Naoishe, who is studying biology and double award health and social care at A level, even launched an appeal on Facebook, and friends responded in their droves.

With the amount growing steadily, the schoolgirl made the brave decision to have her hair chopped off in November - coincidentally Pancreatic Cancer Awareness Month.

At this juncture, one of Ireland’s best known businessmen, Larry Goodman, became involved, promising to match the fundraising total to date - with his company the APB Food Group duly donating a staggering £5,000.

The teenager said: “It was an absolutely fantastic donation and it helped bring the tally to well over £10,000 by Christmas.”
The total amount raised to date stands at £12,568.

But Naoishe, who has her sights set on becoming a social worker or an occupational therapist, isn’t finished yet!

“I want to thank everyone who has donated or helped with my fundraising in any way,” she said.

“It’s a fantastic amount but the deadline is February 29 so there’s still plenty of time to add to it.”