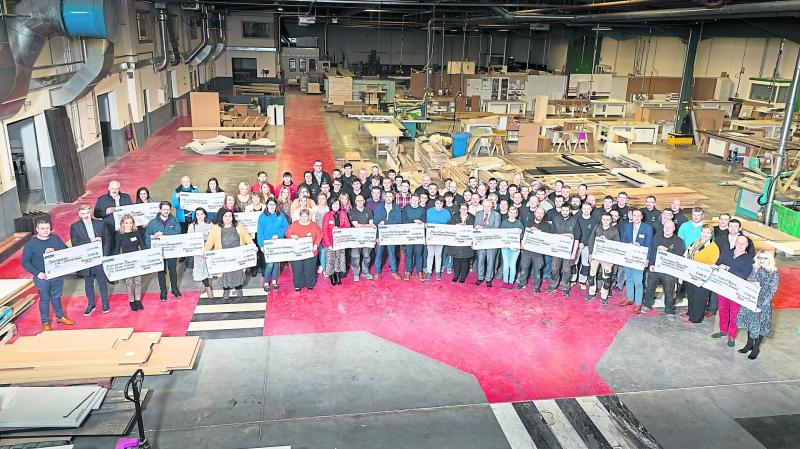 Pictured together are representatives of all the groups who benefited from the huge Specialist Joinery Group charity drive.

Maghera-based Specialist Joinery Group (SJG) raised the funding by through their Christmas charity event Project Santa which welcomed over 3,500 visitors from across the country to Specialist HQ over two days in December.

Visitors were treated to a two-acre indoor Christmas wonderland and Santa’s Grotto Experience, as well as an indoor food market and circus performance.

In August last year the staff set an ambitious target to raise £50,000 for ten charities by hosting their annual Christmas event. The initiative received overwhelming support from the local community, supply chain partners and various organisations, which resulted in the group exceeding the original target and raising a staggering £73,500 during the course of the Christmas Festivities.

During proceedings, the company also announced £1,000 sponsorship for local man Aharon Donaghy who is running the London Marathon this year in aid of Child Bereavement UK.

During the presentation, Managing Director Ciaran O’Hagan shared his thanks to the local community, SJG supply chain, event partners and local businesses.

“Now in its fourth year of operation the Project Santa event continues to grow from strength to strength. We would like to express our sincere gratitude for the support that we have received from the local community. To all the staff at SJG and our event partners please be very proud of what you have achieved in supporting these brilliant causes. Looking to the future, it is our intention that Project Santa 2020 will be back bigger and better! We plan to run Project Santa 2020 on the weekend of 5th and 6th of December. Tickets will go on sale via the usual outlets in September and further details will be announced in due course.”

The charities shared their insight to the programmes that will be supported by the funding they received.

Across the board, the charities shared messages of how their limited funding is under increasing pressure and they emphasised their thanks to the Specialist team and all patrons of Project Santa for their support.