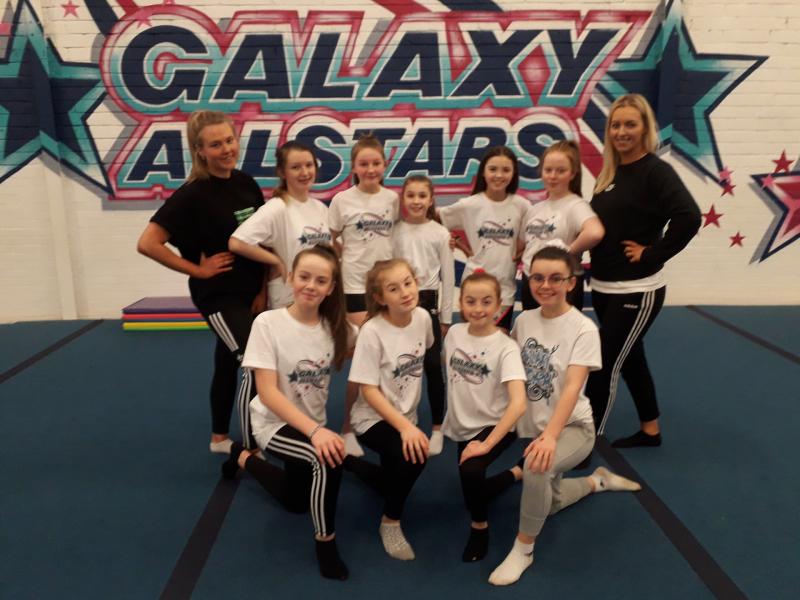 The first ever junior hip hop team to represent Ireland at the world championships is heading Stateside in April.

Speaking to Derry Now, while keeping a watchful eye on the hard-working hip-hoppers, lead coach, Irena Noonan said the excitement about heading stateside for the prestigious competition was “out of this world.”

Irena said: “The International All Star Federation (IASF) Dance World Championship is taking place in Orlando, Florida. We are setting off on April 20 and Galaxy Cosmic is competing on April 24, 25 and 26.

“It is an absolute opportunity of a lifetime. These kids have come together from Donegal and Derry and formed an amazing team. They competed in Gormanstown (Meath) just before Christmas. We were hoping to do well in our category but the girls exceeded all expectations and bought their way with the Florida bid to represent Ireland. They were competing against 13 other teams and they won! They are aged from nine to fifteen.”

Acknowledging her assistant coach, Holly Bonner, and Galaxy All Star mentor, Aoibheann Carlin, said she still cannot believe Galaxy Cosmic is the first ever Ireland junior hip hop team to get to the World Championship.

Irena added: “We are planning a few fundraising events over the next few weeks. We will be holding some charity nights and bag packs. However, we also want to give back to anyone who supports or trip to the Worlds with a bit of fundraising. We will be more than happy to come along and dance at their events in return.

“I honestly can't wait. For me it is something that any dance teacher would love to be able to do, take a team of kids to the World Championships.

“The girls can't wait. They are ecstatic. They are working really hard. We are practising once a week at the minute. This has been going on since September. We are working on a routine and they do that every week for an hour and a half. Practice will increase a bit closer to the time.

“The routine lasts two minutes and 15 seconds, so you really have to showcase yourself right away. You have to go for it and try your best and really, really showcase yourself,” smiled Irena.

Hip hop aficionados will be able to watch Galaxy Cosmic performing in Florida. Their event will be streamed on Varsity TV and Flow Tube.

A clearly delighted Aoibheann Carlin said up until this year Galaxy had been focusing on trampolining and cheerleading.

She added: “However, there are other divisions within cheer called dances disciplines like hip hop, contemporary, jazz and pom dance.

“We were aware there were one or two opportunities across Ireland to allow dance teams to go and compete at world championships. We were also aware of other strong hip hop clubs in the town and we thought we could work in conjunction with them to pull in some of the best talent from across Donegal and Derry and maybe try to branch into the hip hop division of performance cheer.

“So, we put together a team, in the hope of getting one of these elusive bids for the World Championships and then it all happened, Galaxy Cosmic competed at Twenty First Century Cheer in December and they beat off seniors in hip-hop, pom, lyrical and other dance divisions from all over Ireland and we won the bid.

“I am currently coaching the NI Cheer Team, so I was going to to be going to Worlds anyway so I thought, 'If we are going to do it, this is the best time.' I contacted Irena and we held auditions in September. We worked with Matt Jones, a choreographer I knew in England who had previously placed at Worlds with his hip hop team,” said Aoibheann.

Aoibheann said everyone involved in Galaxy is “flat out fundraising” to take the girls to the Worlds.

She said: “Any local businesses willing to help the team would be very much appreciated. We are also organising a few fundraising events over the next few weeks. These will all be covered on the Galaxy Allstars Facebook Page. I can also be contacted at: galaxygtc@live.co.uk.”