A Derry dad said £35,000 raised for the neonatal unit in Derry is a “mark of respect” for the nurses who work there 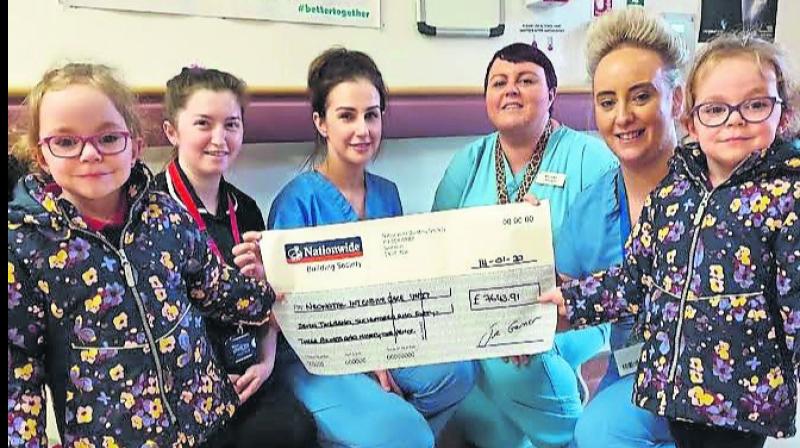 A Derry dad who has raised over £35,000 for the neonatal unit in Altnagelvin Hospital in Derry says it is a “mark of respect” for the nurses who work there.
Bob McLaughlin's identical twin daughters, Sarolaith and Saoirse, spent almost two months in the unit after they were born with a potentially fatal condition called Twin to Twin Syndrome.
The girls are now happy and healthy four-year-olds, but their family will never forget the exceptional care they were shown by the nursing staff at the Neonatal Intensive Care Unit (NICU) at the Derry hospital.
Mr McLaughlin and his wife, Michelle, have tirelessly fundraised for the unit ever since and recently they presented the nurses who work there with £1,420.
"The main reason we fundraise for the NICU is to give recognition to the people who work in it and look after the babies and the parents. It’s just not about buying equipment and supplying resources," said Mr McLaughlin.
"Don’t get me wrong, the doctors are amazing in the unit and life savers, but as parents you just don’t bond with them the way you do with the nurses.
"They are there 24 hours a day caring for the babies."
The McLaughlins endured a difficult time after the birth of their daughters, with two premature babies to care for.
The Twin to Twin Syndrome meant the girls had received an uneven blood supply in the womb and because they were also born early they needed help to feed and breathe.
The couple spent many anxious hours by their daughters' incubators and during that time they saw first hand the work of the nurses in the unit.
"Good news or bad news, the nurses are there to celebrate with you or to pick up the pieces," said Mr McLaughlin.
"They prepared us mentally for everything coming and saw us through it.
"Many times we saw nurses miss lunch breaks and dinner breaks because the unit was stretched.
"We saw them missing their children’s or husband's birthdays because the unit was understaffed.
"One thing about those nurses, their patients always came first."
Mr McLaughlin said he fully supported the recent strike action undertaken by nurses and health service staff for pay parity and safer staffing levels.
"Spending nearly two months with them we saw that they have financial commitments and diffi- culties like everyone else. It was very upsetting for us to learn they were being treated differently from their colleagues in England, Scotland and Wales.
"If the person who makes these decisions walked in the footsteps of our neonatal nurses for a week, they might think differently."
Just before Christmas, Saorlaith and Soairse delivered  £1,400 of Foyleside Shopping Centre vouchers to the nurses, which was raised through a raffle and quiz night. "This year we organised a stand alone event for our NICU nurses simply because they deserve it and we wanted to let them know how much the public think of them,”said Mr McLaughlin.
"We have received Facebook messages and thank you cards from nurses we have never met so it just showed us how much it meant to them.
"The night we left over their Foyleside vouchers the strike was a hot topic and it was the perfect time to reassure the nurses they had massive support in our community and that we understood why they were doing it. It was just nice that the community were there for the nurses when they needed a bit of help and support with the strikes and I know they were over the moon with the Foyleside vouchers.
"In Saorlaith and Saoirse's eyes it was mission accomplished."
Earlier this month, the twins delivered the latest cheque for  £7,643.91 to the NICU.
A spokesperson for Western Health and Social Care Trust said: "This is the fourth donation the McLaughlin family have made to NICU as a show of appreciation for the great care Saorlaith and Saoirse received during their time there in 2016.
"The family has raised a total of £35,192 for the Unit.
"Staff in the Neonatal Intensive Care Unit are overwhelmed by the incredible generosity of the McLaughlin family, the local community and businesses who have been fundraising to support our premature babies and their families who we care for in the Unit.
"Thank you to everyone who has donated it is very much appreciated."