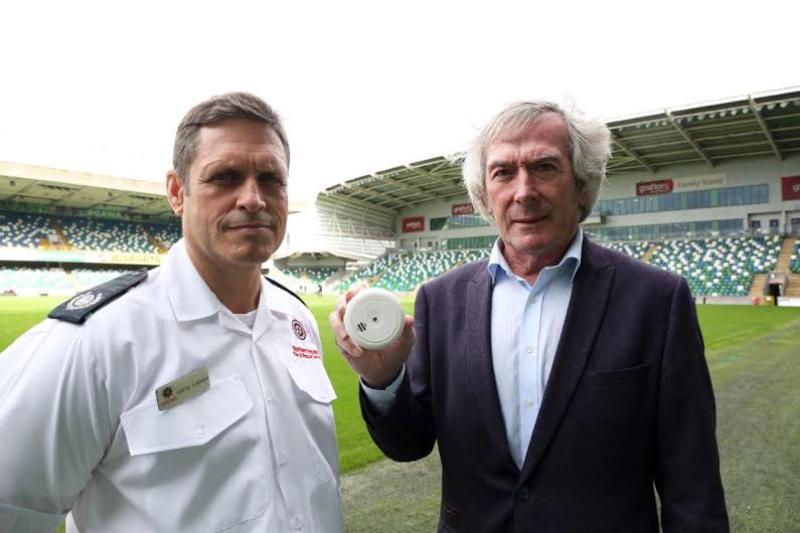 NIFRS Group Commander Gerry Lennon and Pat Jennings reminding people of the importance of having working smoke alarms in their homes.

Northern Ireland Fire and Rescue Service (NIFRS) has emphasised the need for all homes to have working smoke alarms, following two fatal accidental house fires last month.
The stark warning comes after NIFRS released statistics that showed that there were 78 accidental dwelling fires in December 2019 alone, and that in 13 of the incidents, a working smoke alarm was not present in the property.
The statistics also show that 12 people were injured and that two people tragically lost their lives as a result of accidental dwelling fires during the month.
Group Commander Gerry Lennon, head of prevention, NIFRS, said: “It is tragic that two people have lost their lives as a result of accidental house fires during the month of December.
“The winter period is a very high risk time of year for fires in the home, due to increased fire hazards, such as candles, portable heaters and overloaded sockets.
“Before Christmas we worked closely with the community to warn of the dangers of dwelling fires over the festive period, but it’s important to continue to remain vigilant during January and February, as they are also dangerous months.
“The reality is that the danger of people being killed in accidental dwelling fires is higher during these months than at any other time of the year.
“This is why it is especially important to ensure your home, and the homes of your family, friends and neighbours, are fitted with working smoke alarms. Smoke alarms are vital as they alert occupants of the house to a fire, allowing more time to escape.
Group Commander Lennon concluded: “In December it was encouraging that several accidental dwelling fires were reported to NIFRS due to a neighbour hearing the smoke alarm, and making the call to us. We would continue to encourage neighbours to act if they hear a smoke alarm.”
Former Northern Ireland goalkeeper, Pat Jennings, NIFRS community safety ambassador, said the winter months were “particularly dangerous” for those who were at risk- people aged 50 and over, anyone who has a disability or impaired mobility, or anyone with a health condition that would impact on their ability to respond to an emergency.
He added: “As NIFRS community safety ambassador I would appeal to the community to consider the wellbeing of those at risk, and ensure they have a working smoke alarm. Check their home for fire hazards, and make sure they are being used safely, in order to ‘STOP’ fire in their home. Please refer them to NIFRS for a free Home Fire Safety Check if necessary.”