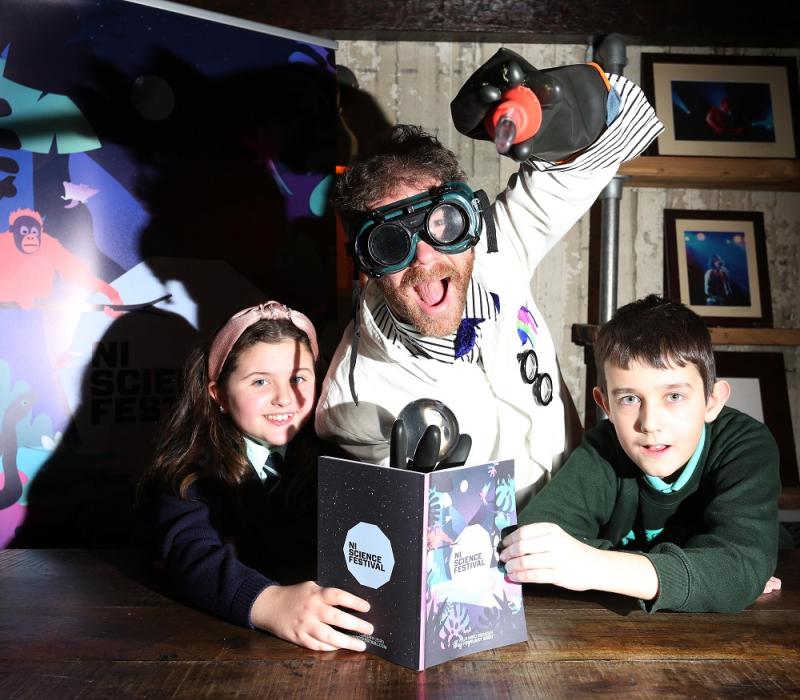 Little scientists are set to take over Dungiven's Dry Arch Centre as part of Northern Ireland's Science Festival 2020.
Children aged from two to four years old are being invited to come along, put on a lab coat and become a mini professor as part of the special February 14 event.
Eager Einsteins can take part in demonstrations and experiments as part of a huge programme of science related events taking place across County Derry and beyond.
The complete programme of events was revealed at the Nerve Centre attended by special guests, key supporters, sponsors and local school pupils from Thornhill College, Oakgrove Primary School and Long Tower Primary School.
Michael McCloskey, Head of KS3 science at Thornhill college, entertained guests with hands on experiments and workshops during the launch.
The festival is packed with thought provoking workshops, talks and forums for people of all ages, addressing our planet’s biggest challenges and issues in 2020 from ecology, neuroscience, the concept of time to air pollution and genetics.
The NI Science Festival welcomes back the hugely popular Maddie Moate to Strabane following her sell-out success last year. Hear Jessica Hepburn share her personal journey around the science of fertility in her talk The Pursuit of Motherhood at Bishops Gate Hotel (16 February).
Badminton School, England will be showing Foyleside shoppers the wonders of freezing everyday items in liquid nitrogen (15 February) and providing teacher workshops in the Nerve Centre (13 February). Dr David Coyle explores the science of eating disorders in his engaging talk at the Nerve Centre (20 February).
Come along to the Riverside Theatre for the Leicester Comedy Festival 2019 award winning Robot Chef with Fox Dog Studios (20 February). Experience a fry up like no other cooked by an avatar operated by the audience and their phones; a hilarious show full of surprises.
This year’s children’s events have expanded for all the family with more shows than ever before to entertain children over half term. The new ‘Create, Make, Play’ section in the festival programme features a range of hands on workshops from a range of partners aimed at those with busy hands and curious minds.
NI Science Festival director Chris McCreery said the eleven day festival’s purpose is to change perspectives and inspire
He said: “This year, we will be focusing more than ever on the climate crisis through a blend of science, exploration, education and storytelling. We are proud to present a range of events aimed at fostering an appreciation of our natural world. From foraging on beaches to stargazing on mountains, join us for a range of events highlighting our natural open spaces and beautiful places.”
“Six years on we are one of the largest celebrations of science in Europe. As the festival has grown the calibre of speaker endorsements keep coming thorough from Professor Brian Cox, Liz Bonin and astronaut Colonel Chris Hadfield, therefore we believe the NI Science Festival must play a role by championing sustainability and appreciation of the world around us.”
John Peto, chief executive of the Nerve Centre said: “The Nerve Centre is absolutely delighted to see our partnership with the NI Science Festival continue to grow in 2020. With an even bigger programme of top-quality events in an ever-increasing range of venues across the North West.
“It’s a brilliant programme and we are privileged to bring so much of it to the North West for families, for schools and for anyone who’s interested in having fun while learning something new, so come and join us this February!”
Deputy Lord Mayor of Derry City and Strabane District Council, Councillor Cara Hunter, said: “Derry and Strabane District Council are delighted to support the NI Science Festival. Now in its sixth year, the festival continues to grow each year with even more exciting, diverse and unique events for all ages.
The Festival showcases the talent and STEAM industries across the North West and Ireland as a whole, as well as raising the city’s international profile, in terms of the quality of speakers it attracts. The uniqueness of this festival is in the way it can make Science fun and engaging for all ages and abilities. There literally is something for everyone."
NI Science Festival kicks off across Northern Ireland in various venues from 13 - 23 February 2020.
For more information about NI Science Festival events and bookings, visit www.nisciencefestival.com and keep up to date with the festival on social media via Facebook and Twitter.