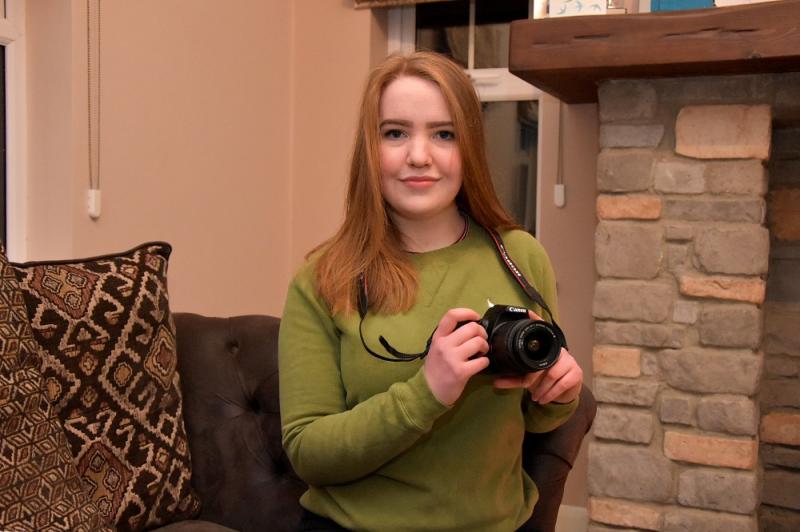 Aoife Fullerton with her camera, having made a video for the local S.T.E.P.S charity. Photo: Mary K Burke

A Co Derry student has received praise for an online video she created to raise awareness of suicide in the Mid Ulster area.
Aoife Fullerton (17) from Draperstown says she wanted to encourage people to share how they are feeling by linking up with local charity S.T.E.P.S. in light of recent events in the area.
After collaborating with Aoife, S.T.E.P.S. shared her work on their Facebook page and the powerful video has been shared over 165 times, as well as accruing over 1,800 views on YouTube.
The Creative Media Production student told us why she decided to make the video and why she chose S.T.E.P.S. as her focus: “In rural areas of counties I feel like there’s not enough support. It’s a topic that’s really strong and really powerful and people should be talking about it.
“I used to go to St Colm’s HS and they did a lot of work with S.T.E.P.S. so I had workshops and things like that with them. The workshops were really good so that’s one of the reasons that I decided to pick them.”
Karen McGuigan from the S.T.E.P.S. charity said they were delighted that Aoife had chosen them as the subject for her video and that they were thrilled with its impact.
“Aoife approached us, private messaged the page and said she was really keen to do something to raise awareness of mental health and she wanted to promote a local charity. I put the call out to our committee and asked if anyone wanted to be on it and we wanted a representation of STEPS.”
“The impact and the amount of feedback we have had has been phenomenal. We all spoke at different times. Everyone thought that we had all been together but we never even met those young lads. We all did it at different times and the message is clear – get people talking. Any chance that we get to get suicide and mental health talked about openly, we believe that’s the difference.”
The impact and reach of her video came as a surprise to Aoife, but she is happy that her work is helping to break the stigma attached to speaking about mental health.
“I didn’t think it was going to reach as far as it did but I’m really pleased with it. The video will hopefully make people more aware that it’s okay to speak up about it.”
S.T.E.P.S will be holding a Night of Remembrance event on Wednesday, February 19 at Church of the Holy Rosary, Draperstown. More details are available on their Facebook page or Karen can be contacted on 07904564218.