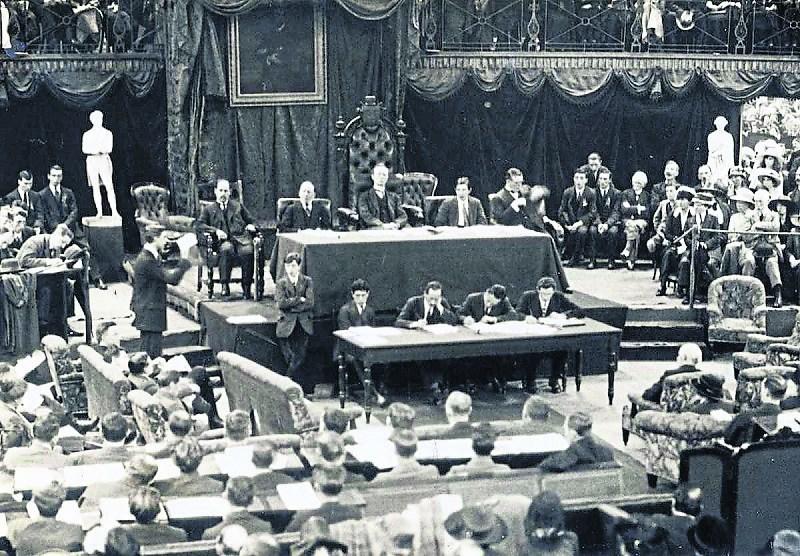 An exhibition celebrating 100 years of Dail Eireann officially opened in Derry today.
The role of the first members of Dáil Éireann is being highlighted as part of the Dáil Éireann Centenary Exhibition in the Minor Hall of Ulster University, Magee campus,.
The exhibition, entitled “Dail 100,” runs until 26 January.
Derry is the fourth location outside of Dublin after Galway, Cork and Belfast to host “Dáil 100.”
The launch of the exhibition at the Magee campus of the Ulster University, is part of a programme of events designed to commemorate the first public sitting of Dáil Éireann in 1919.   It is presented in association with the House of the Oireachtas Commission and the Department of Foreign Affairs.
It features a photo exhibition, information stands and a “photo booth” that allows members of the public to take their own photograph in front of a Dáil Chamber background.
Today’s event will be officially launched by the Ulster University provost Malachy O’Neill.
The event will also feature two short talks by historians Dr Eamon Phoenix and Dr Adrian Grant, setting out the local context of the 1919 election and its repercussions for the region.   January 21 last year marked 100 years since the first public meeting of Dáil Éireann, following island- wide elections in 1918.
Closing a year-long tour, the exhibition explores 100 years of a shared democratic history, the role parliamentary democracy plays and the way in which democracy is shaping the world today.
The arrival of the regional exhibition is part of celebrations to mark 100 years of Irish Parliamentary democracy and educate the general public about the role and importance of the Irish Parliament.
By bringing the exhibition to Derry, the Houses of the Oireachtas is following on from fully-subscribed open days enjoyed by, young and old, in Leinster House in January of last year.
The exhibition outlines the many ways in which the work of Dáil Éireann has changed and developed since those early days.
Dáil Éireann held its first public meeting in the Round Room of Dublin’s Mansion House on the 21 January 1919. All elected members were invited to attend that first meeting but given the complicated political landscape of the time not all could or would attend.
On the day, 27 members were present in the Mansion House. They declared Irish independence, sought inter- national recognition for Ireland’s freedom, and set about the process of building a State.