Bronagh Gallagher travelled to the US for the red carpet event 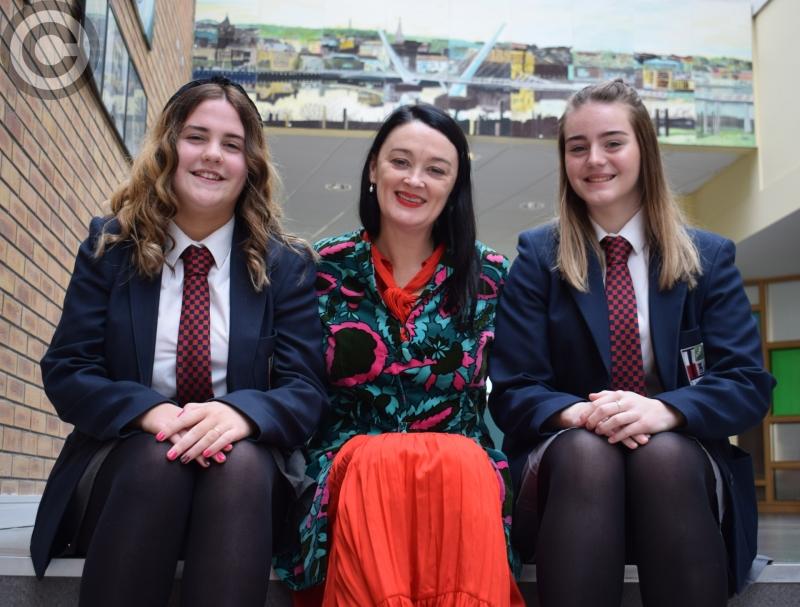 Bronagh pictured on a recent trip to Lisneal College.

An award winning film set in Derry starring the city's own Bronagh Gallagher got its American premiere last week.
Bronagh travelled to the 35th Santa Barbara International Film Festival last Wednesday for the screening of the all female movie 'A Bump Along the Way'.
She plays the lead role in the film, which was produced by her sister Louise Gallagher and written by fellow Derry woman Tess McGowan.

'Bump Along the Way' premiered at the 31st Galway Film Fleadh last July, where it won the award for Best First Irish Feature, and had its international premiere at the prestigious Toronto International Film Festival.

Speaking at the Derry premiere last October Bronagh said it was 'very much a Derry woman's story'.

"It's about a woman in her 40's who goes on a night out and gets pregnant, much to the disgust of her 17-year-old daughter.
"She thought she couldn't have anymore kids and she finds herself about to have another one.

"But there's also humour and a lot of jokes about down below so I think we got the balance right and its very much a Derry woman's story."

Bronagh says it was a pleasure to work with her sister Louise and she hopes to do so again in the future.

"We've done a couple of bits and pieces together but this is the first major feature film together.

"I'm so proud of her because she is so professional and she really, really cares for the people she is working with.
"I'm also very proud that we made the film in Derry and I look forward to working with the next  young  generation of film makers here in the city because there is so much talent and the sky is the limit."

A Bump Along the Way was funded by Northern Ireland Screen and Yellowmoon and distributed by Element Distribution.