Boris jets in as Assembly is back in business

Northern Ireland’s 90 assembly members are back in Stormont this week after the devolved government was restored at the weekend. 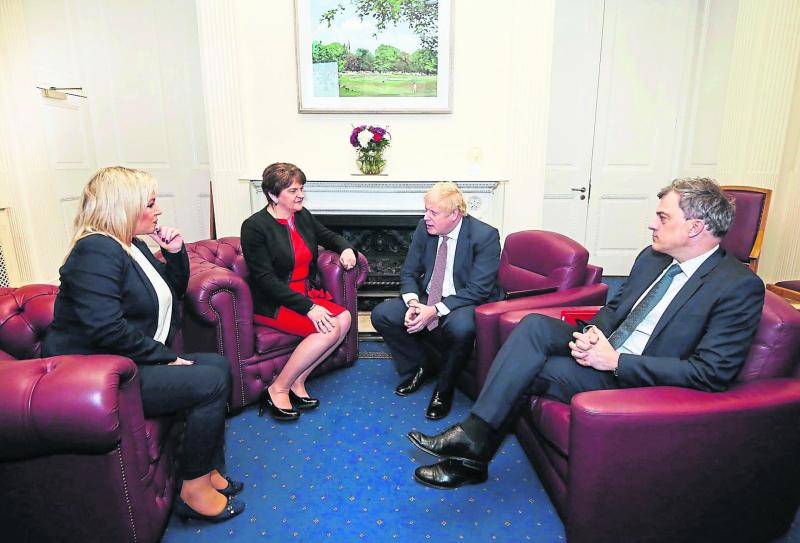 Northern Ireland’s 90 assembly members are back in Stormont this week after the devolved government was restored at the weekend.

The assembly sat for the first time in three years on Saturday after an agreement was reached between the DUP and Sinn Fein to restore Stormont's political institutions.
DUP leader Arlene Foster was appointed as Northern Ireland's first minister, while Sinn Féin's Michelle O'Neill is deputy first minister on Saturday.

Differences
Addressing the assembly, Mrs Foster said the politicians have "many differences".
"Michelle's narrative of the past 40 years could not be more different to mine," she said.

"I'm not sure we will ever agree on much about the past, but we can agree there was too much suffering, and that we cannot allow society to drift backwards and allow division to grow."

Commitment to power
Michelle O'Neill said it was her "sincere wish that 2020 brings real change".

"I see no contradiction in declaring and delivering on our firm commitment to power sharing with unionism in the Stormont Assembly while also initiating a mature and inclusive debate about new political arrangements which examine Ireland's future beyond Brexit.

"Similarly, there is no contradiction in unionism working the existing constitutional arrangements while taking its rightful place in the conversation about what a new Ireland would look like.”

‘Wonderful compromise’
Visiting Belfast on Monday, Boris Johnson hailed the "wonderful compromise" that has seen the return of devolution to Northern Ireland, after meeting Stormont's newly-appointed leaders in Belfast.

The prime minister said Stormont was "open for business again" in the wake of the restoration of power-sharing following three years of political deadlock.

Mr Johnson praised politicians from all sides in Northern Ireland, saying they had "put aside their differences, stepped up to the plate and showed leadership".

"I just want to say how grateful I am to all the parties, to everybody here in Northern Ireland, for the way they have compromised the way they have worked together to get Stormont up and running once again," he said.
"It's shown a willingness to trust each other and to set aside differences and I think it's absolutely commendable and wonderful to see.

"Never mind the hand of history on my shoulder... I see the hand of the future beckoning us all forward.
"And I hope that with goodwill and compromise and hard work on all sides it will be a very bright future indeed."
The British government made a number of financial promises to get the "New Decade, New Approach" agreement over the line.

Ministers at Stormont are now keen to nail down precise figures.

There are reports the government could announce a £2bn package, but a Downing Street source has described this figure as "just speculation".

And Mr Johnson himself did not answer when asked by journalists about the £2bn figure.

Additionally, the Irish government made financial pledges within the agreement to honour commitments to part-fund some north/south projects, such as the A5 dual carriageway and a redevelopment of the Ulster canal system.

‘Critical reforms’
Speaking ahead of the discussions, Mr Johnson said they will focus on how the executive intended to take forward "critical reforms" to public services.

"This is an historic time for the people of Northern Ireland," he said.

"After three years, Stormont is open for business again with an executive who can now move forward with improving people's lives and delivering for all communities in Northern Ireland."

The cause was a row about a botched green energy scheme, a dispute that later widened to include more traditional wrangles on issues like the Irish language and the legacy of the Troubles.

Mr Johnson said in his news conference that there could be "no repetition" of the scandal.

"It is vital that public spending in Northern Ireland is properly invigilated and there is no repetition of that kind of thing," he said.

The prime minister added that the new agreement contained provision for "proper responsibility for the use of public funds".