A number of talented musicians from Co Derry are set to take part in a special performance at the home place of celebrated Nobel Laureate Seamus Heaney. 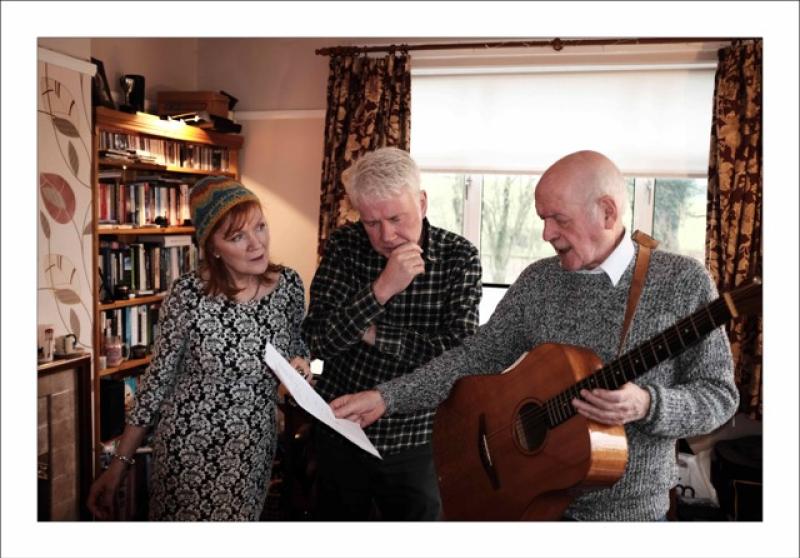 Anne Tracey, Michael Corey and Roy Arbuckle in rehearsal mode before their Heaney Home Place gig on the 11th of January

A number of talented musicians from Co Derry are set to take part in a special performance at the home place of celebrated Nobel Laureate Seamus Heaney.

For the third year running, and back by popular demand, Roy Arbuckle is joined by singer Anne Tracey for an acoustic afternoon of music, song and poetry at the at the event taking place this Saturday, 11 January.

Speaking about the event, Roy said: “The poetry of Seamus Heaney has always captured my attention. Often Heaney manages to say with a touching sensitivity and brilliant eloquence the kinds of things I am also trying to say through my own song writing.
"His is truly poetry for the soul. To be invited to play at the Heaney HomePlace for this, the third January running is a special honour and a thrill.”

During the afternoon gig, which will take place between 2.00pm and 4.00pm, Anne and Roy will feature tracks from their “Songs for the Soul” CD .
All tracks were composed by Roy, as well as songs from artists as various as Judy Collins, Tom Waits and the late and much mourned, Eamon Friel.

Anne explained: “Both of us are delighted to be joined by that fabulous musician and arranger, ‘the maestro’ Eddie O Donnell on keys and guitar as well as by my brother, Michael Corey, a mighty singer with a wide repertoire of songs.
“Another Moneymore woman, Maura Johnston, whose poems from 'The Whetsone' were launched to great celebration at the Heaney HomePlace during March 2019, will add a special colour and richness to the afternoon.”

The final member of this very talented troupe is Buncana-based Tom Byrne, wizard on both accordion or harmonica.
He will be making his debut at the Heaney HomePlace.
“The six of us are all looking forward to performing together at the Home Place,” said Anne.

She added: “We have chosen a set-list which includes both original and traditional songs, songs we hope will touch the hearts of the audience gathered together in Bellaghy just a couple of weeks into the new year, songs with a story to them, songs that explore the pull of ‘home,’ ‘identity’ and ‘place’ and songs with a bit of craic to them.

“Though I have lived in Derry city for quite a number of years, for me it is special to be performing in such a magnificent venue so close to my own home town of Moneymore.
“And I am thrilled that my brother, Brendan Corey, is making a pilgrimage to the Heaney HomePlace all the way from Long Island, New York.

“Brendan has been singing and playing professionally in New York for over 40 years but has joined us for a few songs over the past three years.
“He is truly smitten by the atmosphere and audience reception in the Heaney Home Place.”