A book of condolence has been opened at the Guildhall in memory of the late Bishop Mehaffey. 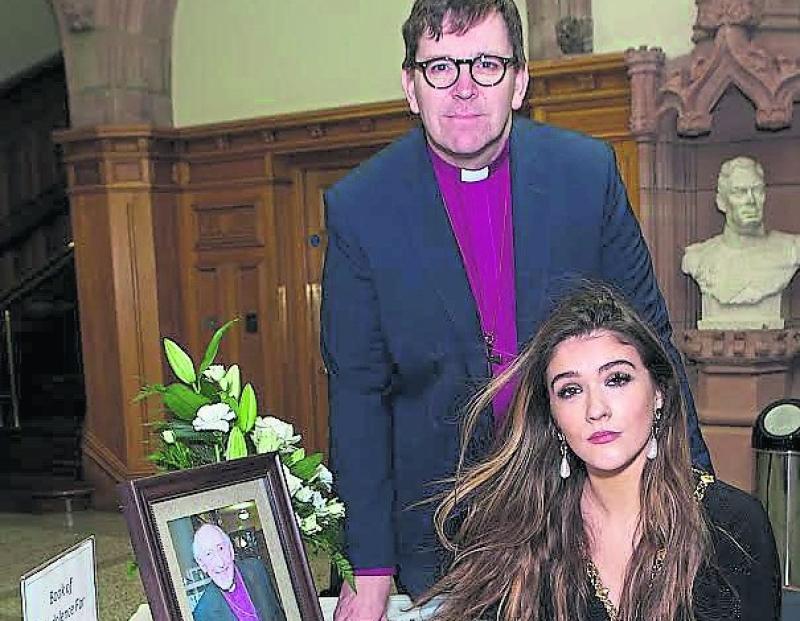 Deputy Mayor of Derry City and Strabane District Council, Cara Hunter, opening the book of condolence in the Guildhall. Looking on is the newly-installed Bishop of Derry and Raphoe, Andrew Forster.

A book of condolence has been opened at the Guildhall in memory of the late Bishop Mehaffey.
The book  was officially opened by the Deputy Mayor, Councillor Cara Hunter, on behalf of the Mayor of Derry City and Strabane District Council, Councillor Michaela Boyle.

Dr Mehaffey’s most recent successor, Bishop Andrew Forster, was among the first to sign it.
Extending her sincere condolences to the Mehaffey family “at this sad time,” Mayor Boyle said the book of condolence was an opportunity for the people of Derry and Strabane to extend their sympathy and show their respect for the Bishop who officiated in the city and district for more than 20 years.

The Mayor, who is currently out of the country on holiday with family, said she was “deeply saddened” on hearing the news and described Dr Mehaffey as “a genuinely holy person, a peace-maker and a risk-taker who was committed to working across the political and religious divide to make a real difference during difficult times”.

Stating Dr Mehaffey would be “greatly missed,” Mayor Boyle added:
She added: “Bishop Mehaffey was a very warm and kind-hearted man who touched the hearts of everyone who met him.
“He was a very religious and gentle person with a warm heart who was genuinely interested in talking to and listening to every person he met. He will be remembered very fondly by the people of Derry, Strabane and the wider North West region for his commitment to peace, his courage and commitment to building bridges.”

The Mayor extended heartfelt sympathy to Bishop Mehaffey’s wife, Thelma, to his children and to the extended family circle.
SDLP leader and Foyle MP Colum Eastwood said he was “deeply saddened” by the death of Bishop Mehaffey.
He added: "His ministry was a constant source of hope during the darkest days of conflict and under the immense burden that violence brought to our city," he said.

Mr. Eastwood said the friendship between Bishop Mehaffey and Bishop Edward Daly had been an “enduring symbol” of the power of partnership and reconciliation to shape lasting change.
He added: "They lived the Christian values that they preached every day - generosity, compassion and an inextinguishable love for this city and everyone who lives here.

"I know they were incredibly proud, and deeply humbled, to receive the freedom of Derry together in 2015.
“His work as a founding member of the Inner City Trust will leave a lasting legacy on this city and helped, in the midst of immense destruction, to heal the scars of conflict.

“My thoughts are with his wife Thelma, their children Wendy and Tim and their whole family and wide circle of friends at this difficult time. I hope they are comforted by the pride that this city takes in James’ memory.”
Karen Mullan, Sinn Fein MLA for Foyle, said she learned of the passing of Bishop Mehaffey “with great sadness.”
She added: “Bishop Mehaffey was a well known figure in Derry and further afield for many years.

“During his tenure as Bishop of Derry and Raphoe and throughout his retirement he struck up lasting friendships from across society and was an inspiration to everyone.
“His commitment to promoting peace and reconciliation in the city won him many friends and admirers and he will be sadly missed by all.

“My thoughts are with his family and friends and all who knew him at this sad time.”
As well as signing the book of condolence, people can also record their tributes online at   http://www.derrystrabane.com/bookofcondolences and messages of condolence will be passed on to the Mehaffey family.