Foyle Search and Rescue (FSR) has appealed for pedestrians to stop jumping over the railings of the Foyle Bridge to take a shortcut to a walkway below because it can spark false alarms that someone has entered the water. 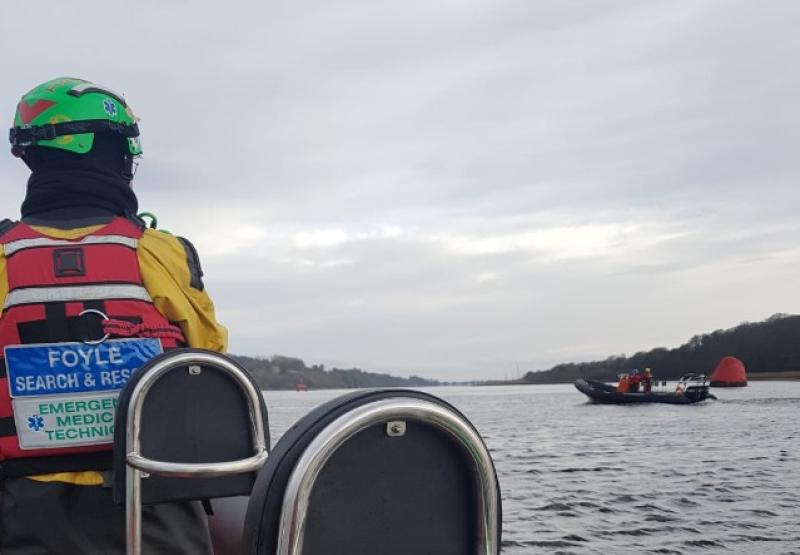 Foyle Search and Rescue (FSR) has appealed for pedestrians to stop jumping over the railings of the Foyle Bridge to take a shortcut to a walkway below because it can spark false alarms that someone has entered the water.
On four occasions in the last two years the charity has launched a full emergency response after reports that people had been seen jumping off the bridge at the Waterside end.

"It looks to a passersby or people in nearby houses that the person has gone over the railings into the water, but they are actually taking a shortcut to the Waterside Greenway path below," explained Pat Carlin, media officer with FSR.
"When we receive a report like this we have to launch a full emergency response."
The most recent incident  occurred on 9.00am on Friday last.

"The PSNI received reports that a person had been observed entering the river based on a member of the public reporting a person jumping over  railings," said Mr Carlin.

"A full response was activated which involved two FSR boats, a FSR rapid response vehicle,Northern Ireland Ambulance Service ambulances and their hazardous area response team and multiple units of the Northern Ireland Fire and Rescue Service and PSNI units being called out and full search protocols being implemented.

"It took about an hour to check the CCTV and the water and make sure no one had gone in.
"Valuable resources from all of the emergency services were tied up and ongoing FSR search operations diverted because someone took a shortcut."

The charity has now urged pedestrians not to take the short cut  to prevent further false alarms.
"We would ask for the general public's cooperation that anyone walking across the Foyle Bridge remain on the pedestrian side at all times as the action of taking a short cut over railings onto a pathway is being interpreted as a person in danger and activating an emergency response. This is the first occasion this has occurred this year, but it took place on numerous occasions last year."

FSR has also urged members of the public not to throw lifebelts into the river, unless there is someone in the water. On a recent search operation two lifebelts were located mid river.
"They had been removed from there housing and the rope detached and thrown into the river within a 48-hour time frame."
Lifebelts are located at 32 locations along the river and have been used to save lives by FSR on over 40 occasions.

"Please do not tamper with these lifesaving devices and if you observe anyone tampering with them phone the PSNI on the non emergency number 101," said Mr Carlin. "As always, we would like to say thank you to the public for their continued support and ask them to continue to report anyone they observe who may be in need of assistance."