'We are doing it for the right reasons' 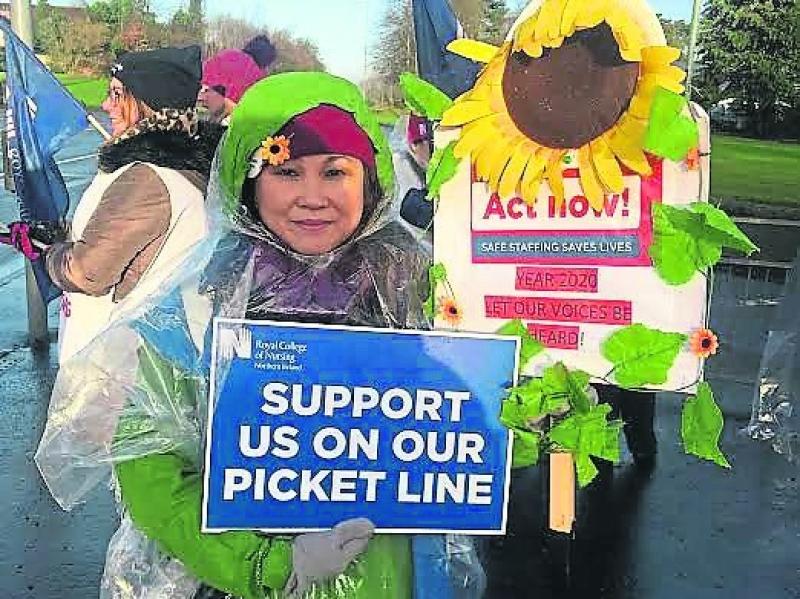 The Western Health and Social Care Trust confirmed  253 outpatient appointments were postponed because of the strike.
Treatment rooms at GP surgeries in the Waterside, Great James Street and Claudy Health Centres were closed and there was a reduced level of district nurses and rapid response nurses.

In a statement released earlier this week, the Royal College of Nursing  called for "urgent measures to address unsafe staffing levels and deliver pay parity with colleagues from across the UK".

The statement said there were almost 2,800 vacant nursing posts in the North and pay had fallen by 15% in real terms in recent years.

Speaking from the picket line at Altnagelvin Hospital yesterday, Mary McMenamin, who celebrated her 30th anniversary in nursing last year, said she has seen the knock on result of the vacant posts.

"The quality of patient care is being compromised and waiting lists are the longest we have ever seen.
"Patients deserve  better and if we don't stand up for them it will get worse.

"We've got a growing and aging population who have complex needs and we need to address the significant deficit in nursing numbers."

Mrs McMenamin said patients and doctors had gone to the picket line yesterday to show their support.
"There is a strong sense that we are doing it for the right reasons.
"There is a real sense of camaraderie amongst the nurses and cohesive support, but this hasn't been an easy decision for any of us."

Altnagelvin Hospital emer- gency department nurse Martina Browne agreed striking was a “difficult decision.”
"It really was a difficult decision. It has been a big conflict for us but we had to do something  and it's sad that it had to be that we came to the street."
Emergency department nurse, Anne McLeod, said patients had given their blessing to the industrial action.
"The public support has been brilliant.

"When I was working yesterday all the patients were saying 'are you striking tomorrow? We support you'.”
Lending his voice to the strike action, SDLP MLA  Mark H Durkan said the future of the health care service was at stake.
"We need to adopt a narrative of cooperation, of respectful disagreement with a willingness to compromise - the future of health depends on it.

"Health workers and the public have had it with hot air and political posturing- they want action.
Mr Durkan con-cluded:"Restorative talks this week must bear fruit."

In a joint statement, People Before Profit Councillors Shaun Harkin and Eamonn McCann said nurses and health service workers had their full backing. "They deserve our admiration and support for courageously taking action to end both contemptuous year on year pay cuts and the criminal destruction of the NHS.

"We won't allow the striking nurses and health service workers to be scapegoated for this crisis or for taking action.
"This is the kind of people power Westminster and Stormont needs to feel if we are going to turn things around for ordinary people."