Tributes paid to much loved teacher who ‘lit up the room’

Tributes have been paid to the former vice principal of a local primary school, Mary Jamison who passed away on Friday at Foyle Hospice, after a long illness. 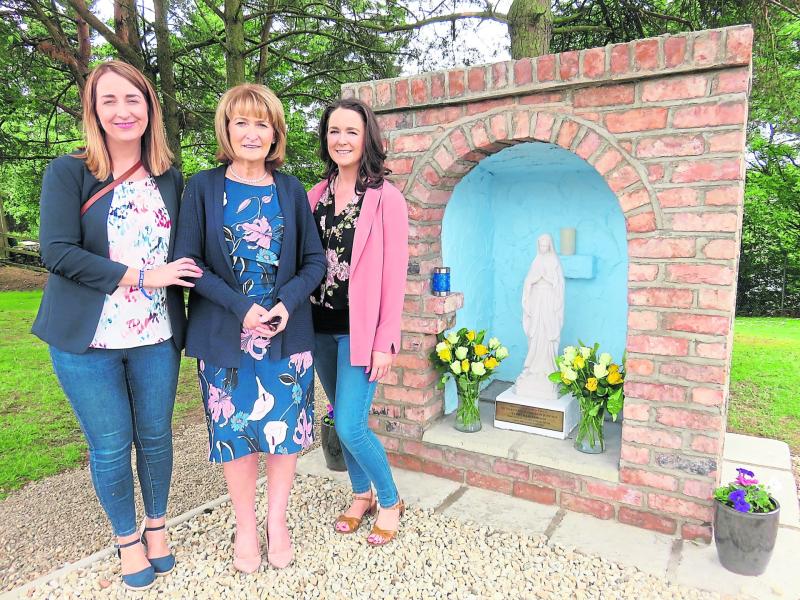 The late Mary Jamison pictured with her daughters Deirdre and Claire in 2019 at the unveiling of the newly erected grotto at the school.

Tributes have been paid to the former vice principal of a local primary school, Mary Jamison who passed away on Friday at Foyle Hospice, after a long illness.
Formerly of Anahorish, Mrs. Jamison (née McGrogan) was a teacher at St. Mary’s Primary School, Altinure for 33 years and made an invaluable contribution to not only the school, but the entire community of Park and beyond.

The much loved teacher retired from her post in June 2018, but continued her positive influence in the school by donating a statue of the Virgin Mary to form a grotto within the grounds, and returned to the unveiling of the grotto a year later with great pride at the finished work.

Current principal of St. Mary’s Altinure, Mrs. Mary Redmond last night led the tributes to her former
colleague; “Mary was a fantastic vice-principal and teacher who enriched the lives of her pupils, colleagues and the people in the whole community of Park.

“She spiritually enhanced the lives of many pupils by preparing them for the sacraments of Penance and First Communion and she was the driving force behind the many successes achieved at St. Mary’s Primary School.
“Mary could light up a room with her brilliant wit and her kindness knew no bounds. Mary’s legacy will live on through all those who knew and loved her,” added the school principal.

Former principal of St. Mary’s and long term colleague Tom O’Kane who worked with Mrs. Jamison for 22 years, also paid tribute;
“Mary was the life and soul of the school. She lit up every room she entered,” said the former principal.
“She always found practical solutions to seemingly intractable problems, even imposed curriculum changes were soon worked through with Mary at the helm,” he said.

“Mary was an inspiration to many pupils who followed her into the teaching profession. She was gentle but always told it as it was. Mary was a brilliant teacher and more importantly, a good friend to me,” added Tom.
Mary’s Requiem Mass took place yesterday (Monday), at the Church of the Immaculate Conception, Trench Road, with internment afterwards at St. Mary’s Cemetry, Ardmore.

Mary is survived by her son Christopher, daughters Deirdre, Claire, Cathy and Anna, grandchildren Amy, Caoimhe, Erin, Holly, Noah and Jamie and brothers Seamus, Francis, Eugene, and was predeceased by her brother Damian.