The handguns were seized following searches by the National Crime Agency (NCA) in the Castledawson area on Monday, December 23. 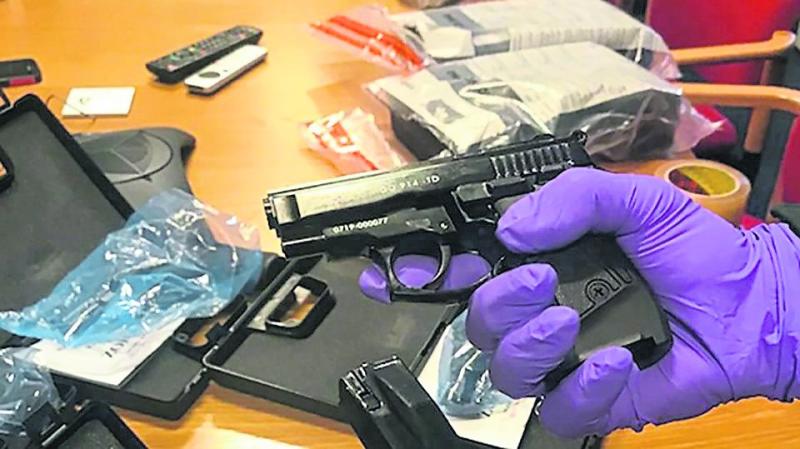 Some of the guns seized from a property in the Castledawson area following a National Crime Agency operation last week.

These are some of the guns recovered in an international illegal firearms probe that's resulted in the arrest of two Co Derry men.

The handguns were seized following searches by the National Crime Agency (NCA) in the Castledawson area on Monday, December 23.

They have now been sent away for analysis, according to the organized crime fighting unit.
Two men, aged 59 and 27, were also arrested by NCA officers working with the PSNI's Paramilitary Crime Task Force.

They were detained on suspicion of the attempted importation and sale of illegal guns.
Cash was also seized during the operation.
Both have since been released on bail pending further enquiries.

NCA Belfast operations manager Gillian Shackleford said: "These men were arrested as part of an international investigation focusing on the supply of illegal firearms.

"Stopping the criminal supply of guns is a priority for the NCA, and working with our partners in the PSNI we are determined to do all we can to prevent such weapons reaching our streets."

It is the second operation to be carried out by the the NCA in County Derry in a matter of weeks.
In a completely unconnected investigation, NCA officers searched premises in the Moneyneena area after the people smuggling conviction of a local lorry driver.

John Dickson (49) was jailed for six months in France after 13 migrants - including a child - were found hidden in a hay compartment of his cattle truck.
The discovery was made at the port of Calais on October 19.

The 49 year-old has since been sentenced in connection with the incident.
Four other men - all originally from Northern Ireland - were later arrested by NCA officials who said the investigation was "active".

As well as searches in Moneyneena, the NCA also carried out a raid on a property in the Newry area of Co Down.