Derry's food tourism business has been nurtured to work towards the ultimate aim of becoming the number one food destination on the island of Ireland by 2025. 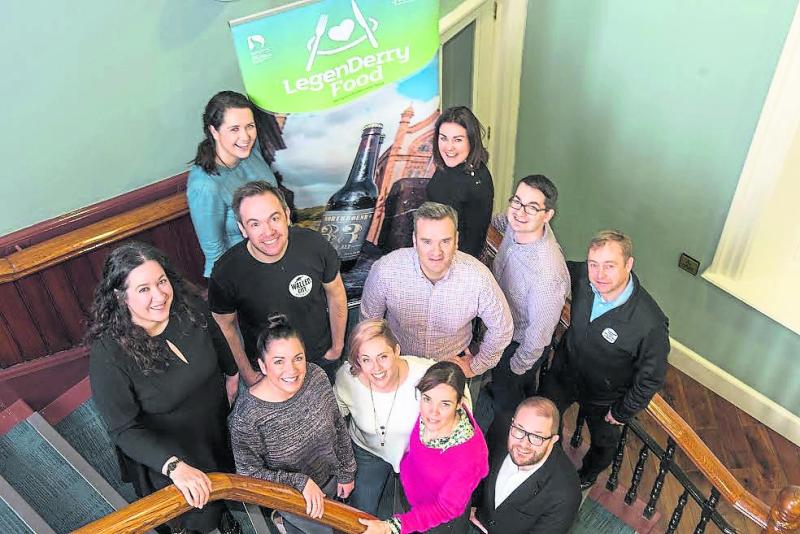 2019 has been a hugely successful year for Derry City and Strabane District Council’s tourism team in helping to develop and nurture the city and district’s food tourism business to work towards the ultimate aim of becoming the number one food destination on the island of Ireland by 2025.
This year saw the launch of the forward thinking and ambitious Food and Drink Strategy and Action Plan alongside the establishment of a Food Network that consists of a 12-member committee and a wider network of over 100 food and drink related businesses.
This has been supported by Interreg Europe NICHE project that commenced in March 2016 and runs to the end of December this year with a focus of supporting food and drink best practices from a number of regions across Europe including Romania, Finland, Crete, Estonia and Poland.
Derry City and Strabane District Council is one of seven partners involved in the collaboration.
During the past year there have been a lot of successful partnerships including the Walled City Brewery and Tornion Panimo Brewery in Lapland linking up to create a new Golden Ale and a Gose style beer, following the success of their first collaboration in 2017.
There was also the creation of the Derry milk stout sausage (Doherty’s Meats and Walled City Brewery) and the Foyster stout made using the unique Lough Foyle Irish Flat Oyster.
A number of innovative products have also been created, including  Grainola Goddess which is made using the special spent grain from the by-product of the brewing process and the first of its type in the world.
Jennifer O’Donnell, tourism manager with Derry City and Strabane District Council, said 2019 was a hugely successful year in promoting local food produce and celebrating the wealth and quality of the local food industry.
She added: “Among the success stories during 2019 was the participation of 48 companies through 55 various innovation projects as part of the Foodovation project. Over half of those companies were from the Derry City and Strabane District Council area and consisted of restaurants or small companies who wanted to develop a retail product.
“The LegenDerry Street Food Festival that was held in July was attended by 20,000 during the three day festival which was hailed a huge success, while the return of the Slow Food Festival as part of the Taste the Island Initiative was widely welcomed and expanded into a five day programme of events and experiences.”
James Huey, chairperson of the LegenDerry food and drink network, said he had “no doubt that 2019 will be seen as the year that the city and district experienced a step change in becoming an iconic food destination.”
He added: “The launch of the Food Network, which involves the industry working in collaboration with Derry City and Strabane District Council, is a unique model in Ireland.
“The benefits of this are already being seen, with the success of the inaugural Street Food Festival, and the incredible events based around the 'Taste The Island' initiative, leading to many tour operators declaring Derry-Londonderry in their top three attractions in the island.”
Catherine Goligher, food tourism officer with the Council, said she was “extremely proud” of the achievements of the past year and the success in further developing and promoting Derry and Strabane as a leading food destination.
She said the local authority, along with the LegenDerry Food and Drink Network, had hugely ambitious plans for 2020 including the launch of the new LegenDerry Food and drink brand and website in February this year.
She added: “We are really excited about this new brand and how it will allow us to showcase our food and drink offering and wealth of local quality produce.
“The website will feature all our local food and drink businesses who become accredited under the new brand.
“There are set criteria and requirements which must be met to become involved, and these are very important to ensure accredited businesses are fully supporting the brand and development of the food destination.
“Businesses accredited will benefit from listing on the website, inclusion within marketing and permission to use the new brand.
“We are encouraging all those involved in the food and drink business to get involved, and are keen to work with businesses to work towards accreditation.”
Concluding, Ms Goligher said: “We strongly believe that a collaborative approach to promoting our region’s food offering is the best way forward and we look forward to a great 2020”
Businesses interested in becoming accredited can contact Catherine for more information directly  at catherine.goligher@derrystrabane .com.
The deadline for applications is 24 January next.