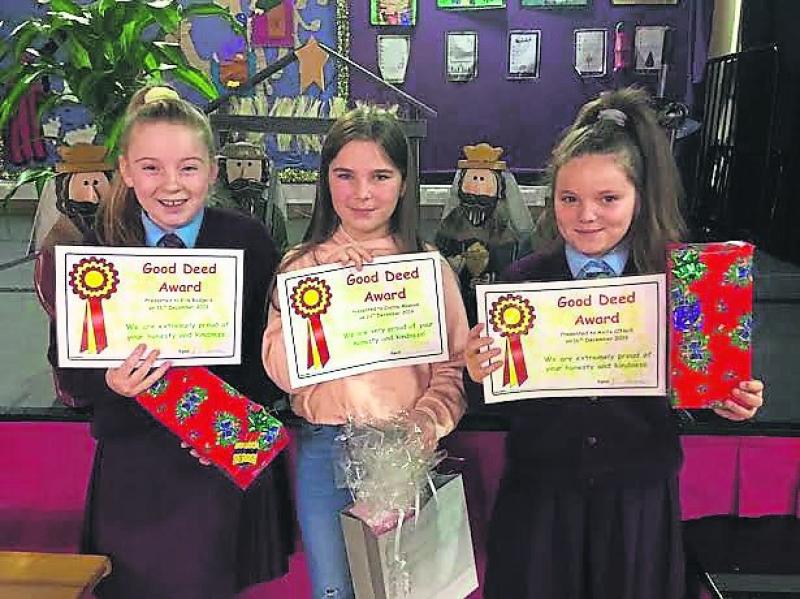 From left, Elle Rodgers, Ciarrai Meenan and Aoife O'Neil who found a wallet containing a substantial sum of money and handed it straight to police.

Three young Derry girls helped to perform a “Christmas miracle” for a man who lost his wallet containing  hundreds of pounds.
Little Aoife O'Neil (10) and Elle Rodgers (11), from St. John’s Primary School and their friend, Ciarrai Meenan (12 ), from St Cecilia's College, found the wallet in Foyleside Shopping Centre.
The quick-thinking trio handed it over to a passing policeman and it was soon given back to its very relieved owner.
The man, who was visiting for the day from Donegal, was so pleased he gave the girls £20 as a reward.
A PSNI spokesperson said: "We did some investigative work and managed to ring the owner who was in the Richmond Centre panicking as he had just tried to buy something and realised his wallet was gone.
"Now, this wallet had a good bit of cash in it, some contactless bank cards and important ID cards. The owner was visiting the city from the South. So, as you can imagine, he was absolutely overjoyed by our call.
"He was so grateful, in fact, he gave us £20 to pass on to the girls."
In recognition for their honesty and quick-thinking, the girls  were rewarded with “Angel of Courage” certificates at St John's Primary School Advent assembly.
"We are very proud of the children for making this Christmas miracle happen," said St John's teacher, Amanda Murphy.
Martine Mulhern, principal of St Cecilia's, said: "We are just so proud of Ciarrai and her two friends from St. John’s Primary School.
"They are such lovely role models to all in our schools and community - honest and kind. Well done, girls!"