Pupils at a Derry primary school have set themselves a goal this Stephen's Day to aid a charity working with vulnerable communities throughout the world. 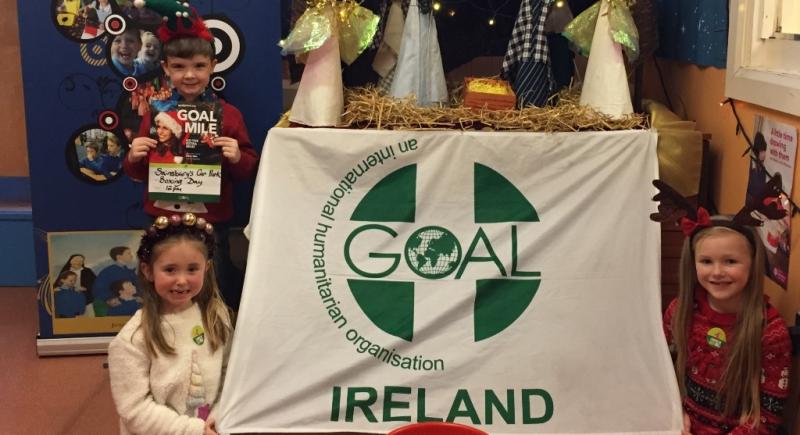 Pupils at a Derry primary school have set themselves a goal this Stephen's Day to aid a charity working with vulnerable communities throughout the world.
As you rush about trying to pick up last minute gifts, source “must haves” for the Christmas dinner or decide on wardrobe choices for Christmas party nights, just take a minute to think how lucky you to have the luxury of stressing over “First World” problems.Millions of others are not so lucky. Conflict, instability, poor governance and climate change have created an unprecedented level of humanitarian need.
GOAL, the international humanitarian response agency established in Ireland over 40 years ago, is committed to working with some of the most vulnerable communities across Africa, the Middle East and Latin America.
The annual GOAL Mile, which is held in locations the length and breadth of Ireland over Christmas period, is one of the charity’s flagships events.
Now in its 36th year, theAL Mile is aimed at raising much needed funds and awareness for the charity’s lifesaving work with the poorest of the poor.
The local GOAL Mile will take place in Derry at 12 noon this Stephen's Day (Thursday, 26 December), starting from Sainsbury’s car park at Meadowbank to Ebrington Square and back. Local people are invited to put their best foot in a show of support for GOAL’s work.
Among those who will be taking part will be pupils from Nazareth House Primary School. Principal Antoin Moran said: “Our school is proud to be associated with this worthwhile event, founded by our former principal Sr. Bernadine Hannan.”
Sister Bernardine, who has since retired, and is now living in Sligo.
She said she was “delighted” local people had taken on the challenge of organising the GOAL Mile and making it a popular family Christmas tradition in Derry.
To take part in the walk, there is no need to register - just turn up and throw some change into the collection bucket before making your way along the riverside, walk over the Peace Bridge to Ebrington Square and back again to finish at Sainbury’s.
All money collected on the day goes directly to GOAL.
GOAL Miles are held at over 140 venues around the country so when you walk along the River Foyle this St Stephen's Day, you’ll be walking in solidarity with thousands of others around Ireland walking for the charity.