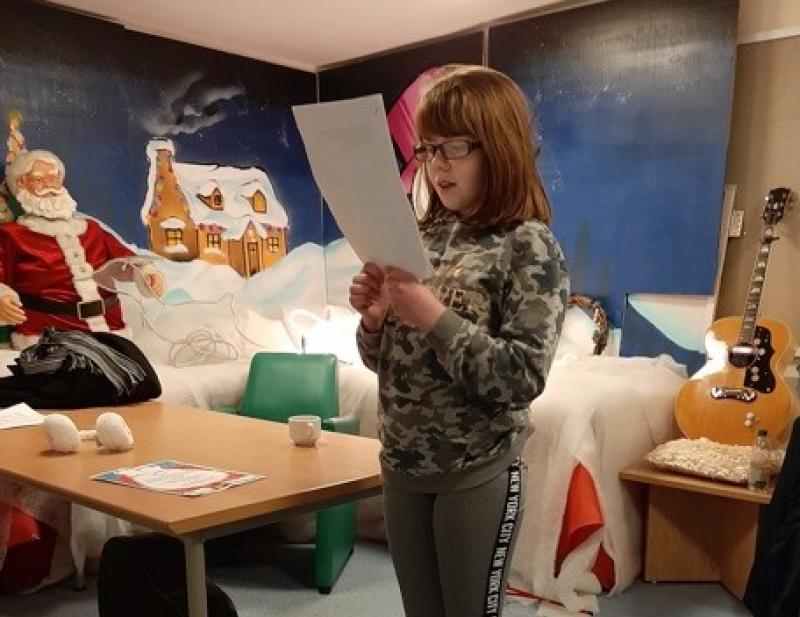 Caitlin impressed the audience with a reading on the evening

A pre-Christmas cultural evening in Creggan proved to be a hit with the local community and one young performer was the star of the show.
The event in An Cro Mor was like one of those “big nights” that flourished in people’s homes years before wall-to -wall football on pub TVs and late night drinking distracted people.
The neighbourly gathering  brought together the Cromore Beatles - Gerry Cassidy, Barry Donaghy and Didi Semple - who played their own set and backed golden-voiced Anne Tracey, all to warm applause.
Local writers, Ben Dillon and Liam Diver, took their spot in the limelight reading a few of their own poems that reflect the challenges life can bring. This reading may be a stepping stone to further writing and more performances from both Liam and Ben.
Julieann Campbell (whose late father came from Creggan Heights and mother from Central Drive) read from her Guildhall Press publication, “Milk Teeth,” and graced those in attendance with a number of new poems she is currently working on.
Damian Gorman is  a quietly compelling performance poet and his rendering of his poignant autobiographical poem, “The Giant Basket,” touched hearts in An Cro Mor.
Undoubtedly though, the evening’s youngest performer, Caitlin Browne, was the star of the night.
The audience hollered their appreciation after her lively reading.  Her father, Jim, in the audience, was a proud and delighted man.
An audience member from Linsfort Drive offered this feedback: "Why can’t we have nights like this more often?”
Creggan Community Collective deserve both thanks and praise for opening their dwoors to this “Christmas Cracker.”