Stormont talks continue amid all out health service strike action

Talks between Northern Ireland’s five main political parties are set to resume this morning with the aim of restoring the power- sharing institutions at Stormont. 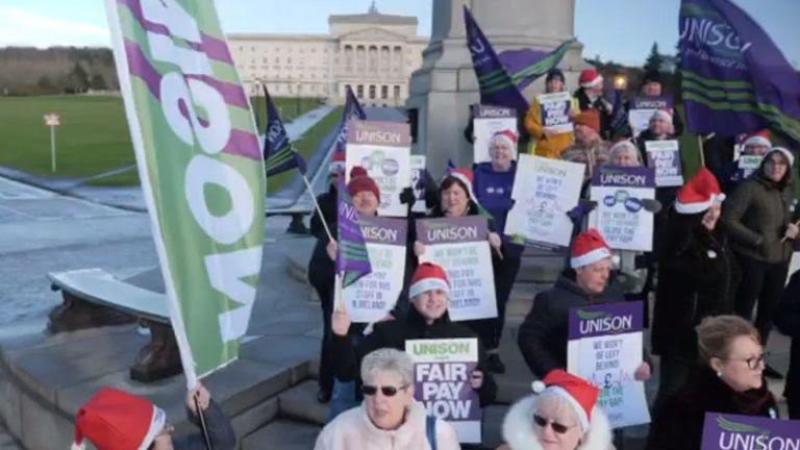 Talks between Northern Ireland’s five main political parties are set to resume this morning with the aim of restoring the power- sharing institutions at Stormont.
Negotiations have been taking place since Monday last amidst unprecedented industrial action by health workers who are demanding pay parity with their counterparts in England, Scotland and Wales. The action is also being taken over concerns about staffing levels within the health care sector.
Yesterday saw the first occasion in more than a century that nurses represented by the Royal College of Nursing took strike action.
Under legislation, there will have to be an Assembly election called here if devolution is not restored by 13 January. The power- sharing government led by the DUP and Sinn Fein collapsed almost three years ago in January 2017.
Northern Ireland Secretary of State, Julian Smith, has stated that with the health service in crisis local political leaders must find a way to restore the Assembly.
The Irish Government has also pledged to work “night and day” in a bid to make Stormont functional again.
Tanaiste Simon Coveney said there was no intention of “bouncing” the Northern Ireland parties back into government, adding they had been discussing the same issues for many months now.
"This is not about trying to force the parties into a space they don't want to move into. But we've had a reality check with the nurses' strike, and I think it's a reminder to everyone that now is the time to get this done," he said.
The negotiations are also expected to move into round table discussions with Julian Smith and Simon Coveney later this week.
PSNI Chief Constable Simon Byrne has also added his voice to the ongoing talks by urging politicians to find an agreed way to deal with the legacy of the Troubles and he also called for parties to back his calls to employ more police officers.
Meanwhile, newly-elected Foyle MP, SDLP leader Colum Eastwood, contended last week’s General Election results illustrated people were “sick of the Stormont standoff.”
Mr Eastwood also called on both the Irish and British Governments to publish a document showing what had been agreed so far.
He added: “The scale of the challenge we face is immense. Our Health Service is in crisis - waiting lists are spiralling out of control and hardworking healthcare staff demand and deserve pay parity with their counterparts across these islands. Our schools are on the verge of a full-blown resource catastrophe if urgent action isn’t taken. And critical investment across the North is being delayed by a failure of political leadership. It has to stop now.
“The SDLP has made bold proposals that are uncomfortable for us but are in the interests of restoring government to meet the needs of patients, pupils and healthcare workers. We will continue to stretch ourselves but it is for the DUP and Sinn Féin to set aside their dispute and act, at last, in the interests of the people we all represent,” he added.
Sinn Fein vice-president, Michelle O’Neill, claimed Mr Smith refused to meet the five main parties on the issue of the health strike.
Ms O’Neill said: “There is a consensus among party leaders that a resolution can be found by the British Secretary of State Julian Smith and civil servants.
“The pay and staffing issue must not be used as a political football within the talks. Party leaders restated there is consensus if the Executive is restored by January 13 that we will adopt a policy towards pay parity.
“On that basis we invited the Secretary of State to come and meet with the five party leaders, where he would provide a commitment to deliver this in the event of no agreement by that date. Regrettably he refused to meet the leaders.”