'Our Muriel' is the talk of the town

New artwork the centre of attention in Waterside 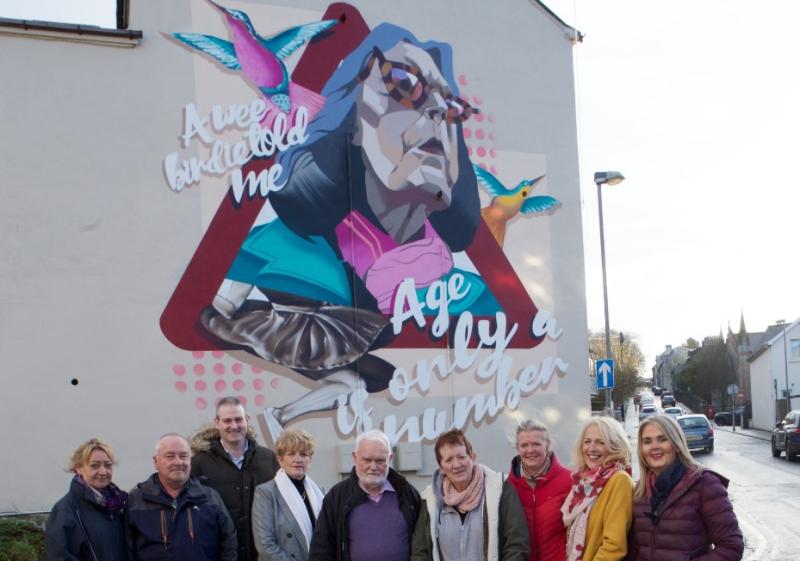 A new   mural on a corner of Chapel Road opposite Malvern House in the Waterside area of Derry is proving to be a talking point.
The latest work by UV Arts (the group behind the Derry Girls mural on Orchard Street) reflects their experience of working with Older People North West and young people from Foyle Down’s Syndrome Trust on creative street art, a project   made possible through the help of Derry City and Strabane District Council’s Good Relations programme.  The gable used to be defaced with graffiti.
The mural, as Karl Porter, explained was their artistic interpretation of the activities and energies  they experienced across the road in Malvern House.
Karl said: “The artists felt it was important to reflect a strong image of an older person, who has been nicknamed  affectionately ‘Our Muriel.’
“ Both he and   Donal O Doherty   felt it was important to highlight the fact that creativity flourishes in all age groups.    “Having led workshops in Malvern House earlier in the year,   they came up with the striking   vision for the Chapel Road mural.”
“Age is only a number” reflects a discussion between the artists and workshop attendees.     “A wee bird told me” captures the  reminiscence and storytelling activities that the artists observed.    “The love of dancing   in Malvern House just had to be there,” said Karl,   “and the red triangle surrounding ‘Our Muriel’ addresses the stereotypical  stooped old couple with a stick image   as represented in the road sign down the street.  We wanted to get away from that.”
Both Donal and Karl of UV Arts were at pains to say that “Muriel’s face” is their artistic vision and not based on any person.
However, that is not stopping the discussions across the street in Older People North West, where many diverse claims have been made about whom the face is   modelled on .
The mural is now a   Chapel Road landmark opposite Older People North West.