All out strike action by health workers scheduled for Wednesday 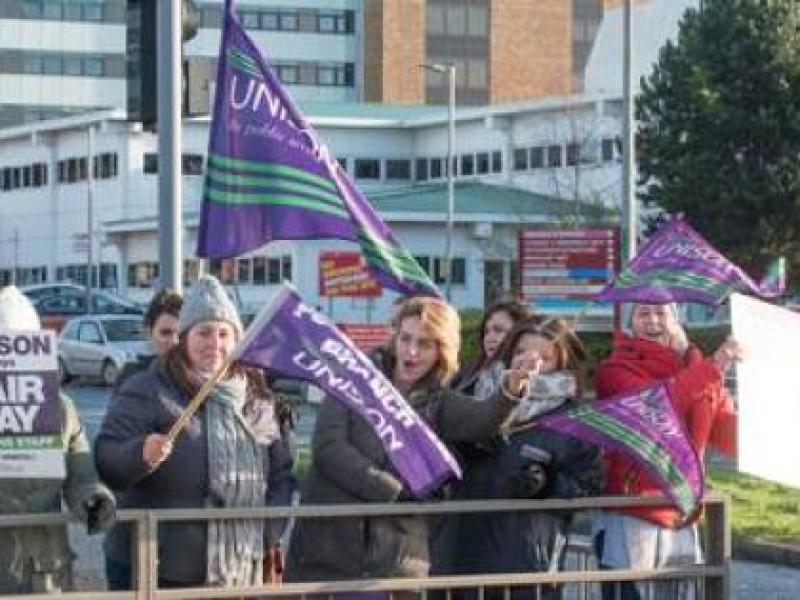 All out stike action by health workers is scheduled for Wednesday.

A twenty-four hour period of all-out industrial action by health service workers is due on Wednesday, unless a last ditch agreement between the health authorities and unions can be reached.
NIPSA workers within the Western Health and Social Care Trust (WHSCT) area will join Unison, Royal College of Nursing and Unite the Union members on picket lines across Northern Ireland as the mooted combined action for December 18 commences.
NIPSA have revealed that their ballot for industrial action recorded a 90.4% vote in favour of strike action and 96.6% desire for industrial protest short of strike action.
As a result NIPSA has said that 24-hour strike action on Wednesday (December 18, 2019) will begin at 12.01am and end at 11.59pm on Thursday (December 19).
On Thursday, NIPSA's health service members will begin a 24-hour period of action short of striking which will mean worker's will not do overtime, unpaid work, will not cover vacant posts or workers on long-term sick or maternity leave and will take all their designated breaks.
The union has said that on completion of the period of industrial action they will develop a plan for further industrial action up to and including March 31, 2020.
NIPSA has said that the current action is necessary because, despite numerous meetings, the employers, the Department of Health and the Government have failed to sufficiently address NIPSA’s claims for pay justice and safe staffing. They added that they will also continue to consult with the other unions to discuss further co-ordination despite having different objectives and tactics in the ongoing dispute.
Calling on all members to attend picket lines, a statement added: "NIPSA has not agreed any exemptions from the industrial action. If the employers identify real emergency situations, they will be able to contact NIPSA’s liaison officers and appropriate arrangements will be put in place. In any incident where strikers carry out agreed emergency cover, NIPSA will view them as acting on behalf of the striking workforce and will expect them to relinquish their wages for the period of the cover."
NIPSA Deputy General Secretary Padraig Mullholland said: “The strike on December 18 will be hard-hitting but our members have no choice but to defend our National Health Service, for too long members have held together a system that is in crisis so that our communities get a decent service.”
Meanwhile, Assistant Secretary Maria Morgan added: “Safe staffing and pay justice are at the heart of our dispute, our members have had enough and have made it clear that action is now necessary.”