The Children in Crossfire founder gave an inspirational speech 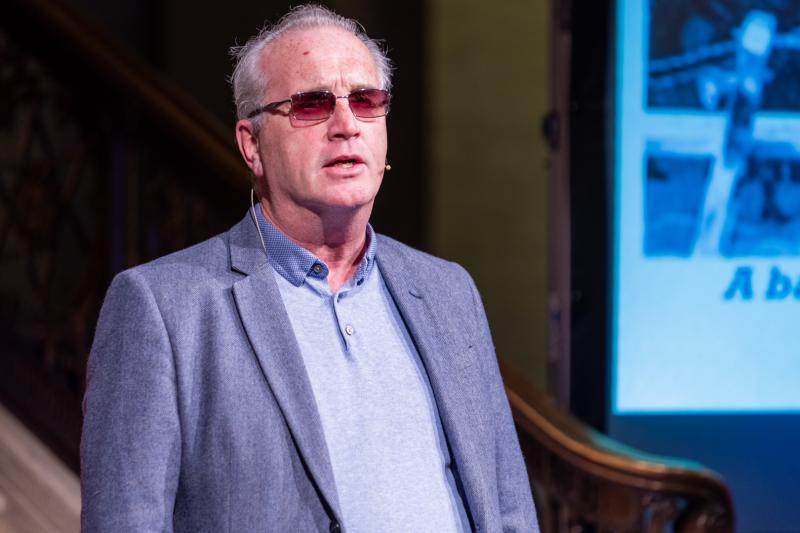 Richard Moore, who was blinded by a rubber bullet in Derry during the Troubles and founder of the charity Children in Crossfire received a standing ovation for his inspiring talk.

A Derry man who was blinded by a rubber bullet by a child has been given a standing ovation at TEDxStormont earlier this week.
Richard Moore, the founder of charity Children in Crossfire, spoke about his life changing injury and his attitude of forgiveness at the event in Parliament Buildings on Thursday.
Compered by Presenter and Broadcaster Sarah Travers, it saw 200 guests fill the Great Hall at Parliament Buildings with a larger than ever online following.

Four of the speakers of TEDxStormontWomen were selected through the Open Mic events initiative run throughout October and November, including Derry therapist Shauna Quigley.

The initiative was part of the TEDxStormontWomen Masterclass programme, which was led by Bespoke Communications, delivering a cross-community, intergenerational, capacity building initiative with the core aim of making girls and women more confident in public speaking.

It follows on from the successful ‘Talk like TED’ programme that ran in the lead in to TEDxStormont earlier this year, when 12 young people from Urban Village areas competed for a spot on stage, at the Great Hall.

The four women all from The Executive Office’s Urban Village areas in Belfast and Derry shared exceptional stories and ideas about homelessness, mental health, education, empowering and health.

Eva Grosman, Curator of TEDxStormontWomen2019 said: “TEDxStormontWomen has developed into a wonderful community-led event that allows women and men from all walks of life to share their unique stories and ideas.

“From the first TEDxStormont in 2013, we have seen a truly diverse range of speakers, who thanks to the ever-increasing online following can reach vast audiences not only across Northern Ireland, but also across the globe.”

Mark Browne, Director of Strategic Policy, Equality and Good Relations, The Executive Office, said: “The joint TEDxStormontWomen and Urban Villages Initiative programme has been an incredible scheme that has enriched so many of those who live in our Urban Village areas in Belfast and Derry.

"The number of women who have put themselves forward to take part in the masterclasses shows the real appetite in communities for the chance to tell their own stories and share ideas.”

“The Urban Villages Initiative is a good relations programme under the Together Building a United Community Strategy Strategy.

"One of its aims is to give the community a voice and through this opportunity we have been able to offer women and girls from different backgrounds and cultures the chance to tell their stories and ideas, while pushing the boundaries of confidence and learning a lifelong skill of public speaking.”